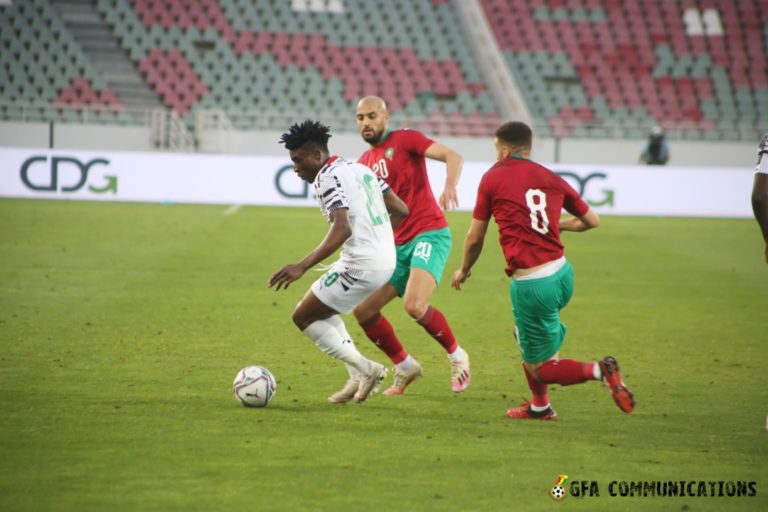 The Atlas Lions of Morocco handed Ghana a painful 1-0 defeat at the Prince Moulley Abdalaah stadium in Rabat in an international friendly played to shape the two sides towards the 2022 World cup qualifiers.

Ghana Had hoped to get a decent result in the game as coach Akonnor needed the build on his AFCON qualification story line, but a 70th minute goalkeeping error from Razak abalora  gifted the Atlas Lions the win.

Ghana Started the game on a more cautious note with the two defensive midfielders Baba Iddrisu, and Emmanuel Lomtey sitting deep in their own half, creative space between themselves and the attackers.

The Black Stars had a huge disconnect between the top men and the wing backs with Ansy Yiadom and Gideon Mensah failing to deliver any meaningful passes to their attackers, however the attacking trio of Joel Fameyeh, Jordan Ayew, and Kudus Mohammed who showed intend at getting a goal earlier in the game but their efforts went wide.

The first half did not produce much more action as both sides kept the ball deep into themselves, with a call for the opponent to open up.

The Ghanaian central defensive pair of Daniel Amarteyt and Nicholas Opoku stood firm on the few occasions they were called to duty, but Goalkeeper Razk Abalora spent the entire duration on Holidays.

The Moroccans lifted their game at the return of the break, introducing Champions League winning star Hakim Ziyech into the game, his inclusion in the game made instant impact, as he delivered a sweet free kick that the defence of Ghana failed to deal with, resulting in the only goal of the game curtesy a header by Jawad El Yamiq.

Coach Akonnor brought on captain Andre Ayew to force a draw, but his efforts were too little too late to get Ghana back into the game.