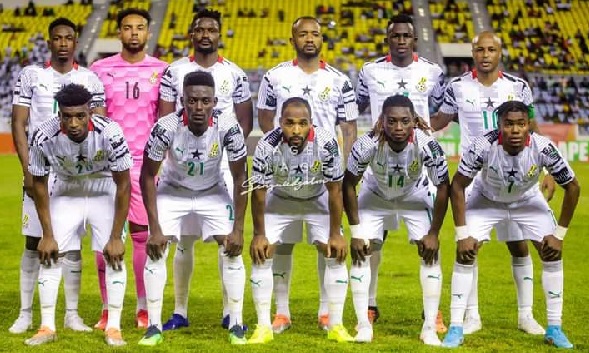 A line up of the Black Stars against Madagascar Follow @Graphicgh

The last minute open invitation extended to football fans in Cape Coast to rush to the Cape Coast Stadium last Wednesday to watch the Black Stars’ Africa Cup of Nations (AFCON) qualifier against the Barea of Madagascar contributed to the massive 3-0 victory.

Prior to the match, organisers of the match had directed fans who wished to be at the stadium to use the e-tickets format to buy tickets at GH¢20 for Popular Stand and GH¢50 for the VIP Stand.

They also announced that each ticket bought was linked to a specific seat to create sanity in the stand.

However, about minutes to kick-off, the stadium was virtually empty. And considering what was at stake, the organisers took to the Public Address system to plead with the media to invite football fans in Cape Coast and its environs to the stadium free of charge.

Soon afterwards, fans started trooping to the stadium up to near capacity. The presence of the fans began to pay off as they gave a standing ovation when the Black Stars entered the stadium for the national anthem.

Their continued support for the team inspired the players to attack in droves moments after kick-off, pinning their opponents to their own half and creating numerous goal scoring opportunities, which either went wayward or were saved by goalkeeper Razaukanirina Rakotohasimbola.

In spite of the missed opportunities, the Stars were undaunted as they continued to play as a team with good inter-positional passes, tackling and good runs to foil the opponents’ attacks, while winning many 50-50 balls to the admiration of the home fans.

The Stars continued to glitter in the second half by unlocking the iron-clad Madagascar defence, banging in three goals in rapid succession to win their first game of the year in grand style.