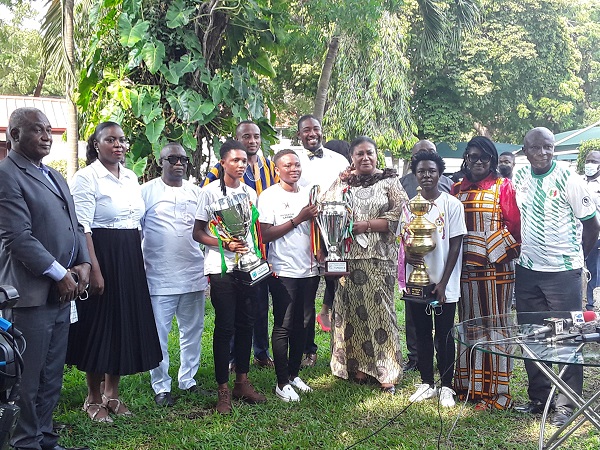 The First Lady, Mrs Rebecca Akufo-Addo has given a GH₵30,000 boost to treble winners Hasaacas Ladies Football Club (FC) ahead of their participation in the finals of the 2021 CAF Women's Champions League in Egypt.

The First Lady presented the sum to the playing body and management of the Sekondi-based team on Monday when they called on her at her office on Monday in Accra.

In an address, Mrs Akufo-Addo congratulated the team for their all-conquering exploits and assured them of more support ahead of their campaign.

She said although she was not a football fan, she would now keenly follow the progress of the team in all competitions and advance their cause to the Presidency through her husband.

"First of all congratulations but I can see in your face that you are eager to do more. I just want to reassure you that I am here for you and I will listen to you and see to your needs," Mrs Akufo-Addo said.

The First Lady also presented Ayekoo Obaatanpa cloths to the team as a symbol of empowerment. 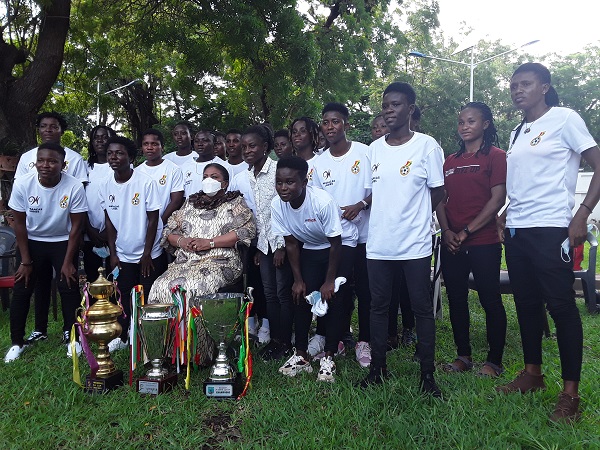 The team presented the three trophies they have won this season - the National Women's League, the Women's FA Cup and the WAFU Zone A Cup - and a budget for their Champions League campaign to the First Lady.

The Chief Executive Officer of Hasaacas Ladies,  Evelyn Nsiah Asare said women's teams in the country were being run from the benevolence of the managers.

She, therefore, urged the First Lady to support the teams with buses and also assist some of the players who had graduated school with jobs.

In an interview with the Daily Graphic, Mrs Asare said she was humbled by the reception of the First Lady and assured that the money would be put towards preparing for the Champions League.

The Chairman of GHALCA, Kudjoe Fianoo also disclosed that the inaugural First Lady's Cup will be held on November 21 this year.

He described the competition as the female version of the President's Cup which has become a fixture on the nation's football calendar.