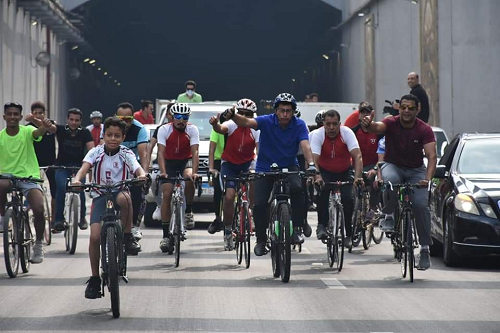 The Egyptian Ministry of Youth and Sports as part of its efforts to introduce its citizens, particularly young people to sports as a lifestyle, has organised a cycling marathon to whip up interest of people in cycling in the country.

The exercise brought together a group of young men and women and several ministerial officials who participated in the marathon.

A statement issued by the Egyptian Ministry of Youth and Sports today [Saturday, August 29, 2020], said the “Ministry is keen on promoting the culture of practicing sports among young people and citizens, and on introducing sports as a lifestyle, which is one of the major pillars of the ministry’s strategy that is accomplished through events and marathons organized in all governorates of the republic periodically.”

Dr. Sobhi praised the Port Said Tunnels project as one of the national development projects taking place in the country under the leadership of President Abdel Fattah al-Sisi, who is driving the country's development engine in various sectors.

He further pointed out that the ministry has held various events regarding these projects with the aim of introducing young people to what is happening on the ground regarding the implementation of major projects, as well as leveraging sports as a tool for the promotion of cities and new projects.

He explained that "Your Bike ... Your Health" initiative which is being implemented by the ministry, was aimed at providing bicycles for the youth and citizens at subsidized prices.

That, Dr Sobhi added, the ministry has so far implemented two phases of the initiative and that the “Ministry is currently working on launching a new phase, including a larger number of bicycles to meet the demands of young people.”

According to him, President Sisi is committed to promoting the idea of sports as a cultural practice within societies, since practicing sports such as cycling improves the physical fitness of individuals and constitutes an economically-efficient mode of transport.