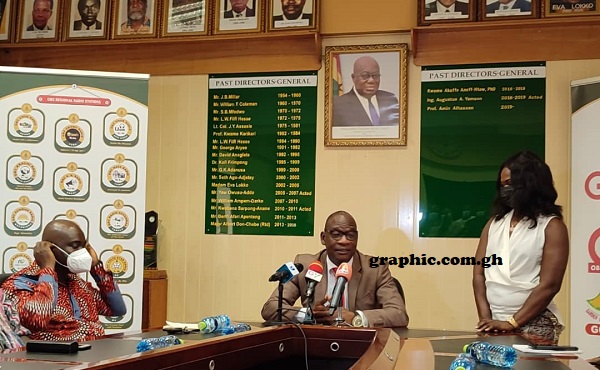 The Ghana Broadcasting Corporation (GBC) has warned multimedia platforms that intend to pirate its exclusive free-to-air television and radio broadcast of the 2021 African Cup of Nations to desist from the illegal practice because they will face the full brunt of the law.

According to the state broadcaster, it will in collaboration with the Ghana Police Service and separately pursue criminal as well as civil reliefs against such entities that pirate the broadcast of the tournament which will be staged from January 9 to February 6 in Cameroon.

Addressing a press briefing on Friday in Accra, the Director of Legal Services of GBC, Mr John Kwame Waja said the state broadcaster had invested more than two million euros into its coverage of the tournament.

He said, as a result, GBC and its broadcast partners would ensure that the content is not pirated on any medium.

"Given the revolution in technology, this is the time that people who will not like to be part of the investment will take the opportunity to pirate, in other words, steal the content and telecast it for free," Mr Waja said.

"The state has invested a lot into this and we are not going to sit back and allow it to go down the drain by way of theft through other mediums".

He said the tournament will be broadcast legally on all GBC platforms and channels including GTV Sports Plus, Garden City TV and Obonu TV as well as eight private television stations that were also underwriting the liability of the coverage.

The Channel Manager of GTV Sports plus, Mr George Lomotey also disclosed that there was still the opportunity for other television stations to enter into partnerships with GBC to broadcast the tournament.

On his part, the Deputy Director of Public Affairs of the Ghana Police Service, ASP Victor Dosoo said there will be proper and full-scale criminal investigations into all acts of piracy around the broadcast of the tournament.

He warned that when found culpable, persons who hide behind corporate identities to perpetrate these crimes would be prosecuted in accordance with the law.