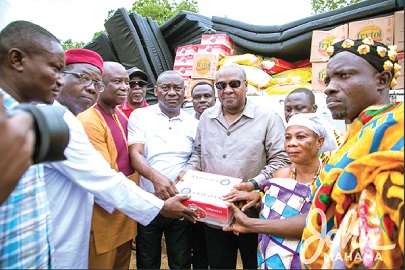 Former President John Dramani Mahama has called on the government to act proactively to ensure that life returns to normal for the people of Appiatse following the disaster that struck the community on January 20, 2022.

“The people have appreciated the response and support from the government after the disaster but their continued livelihoods are also important,” Mr Mahama said.

Mr Mahama made the remarks when he handed over a quantity of food and non-food items for distribution to the people of Appiatse near Bogoso in the Prestea Huni Valley Municipality in the Western Region last Tuesday.

The items were handed over to the Member of Parliament (MP) for Prestea Huni Valley, Robert Wisdom Cudjoe, the Municipal Chief Executive (MCE), Dr Isaac Dasmani, and the Appiatse Disaster Relief Committee, to be made available to the people.

Mr Mahama also presented an undisclosed amount of money to support the further treatment of some of the injured victims.

The donation by Mr Mahama was in response to concerns raised about the reduction in voluntary relief support to the people.

The visit was also to interact with the chiefs, the Appiatse Disaster Relief Committee and the people of the community.

Mr Mahama, in his remarks, reiterated the concern of the affected community about compensation and urged the government to act proactively to ensure that the people are supported to bring their lives back on tract.