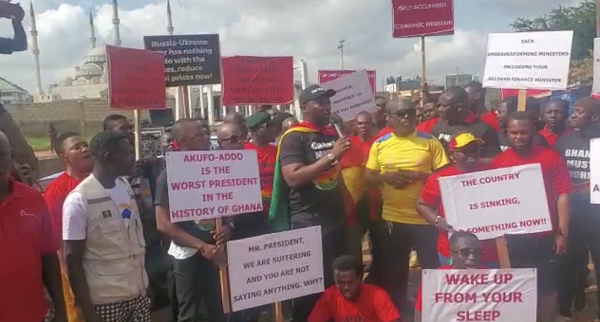 A group of picketers led by the Deputy National Organiser of the National Democratic Congress (NDC), Hamilton Nixon Biney, yesterday presented a petition to the Vice- President, Dr Bawumia to salvage the economy.

According to the members of the group, the Vice-President’s inability to stabilise the economy, after been touted by the ruling New Patriotic Party (NPP) as an economic messiah, was unacceptable.

The submission of the petition, was after the petitioners had a peaceful march through some streets of Accra, after a mini rally that was addressed by some leaders of protest at the Kawukudi Park in Accra.

Their main concern was for Dr Bawumia, who doubles as the chairman of the economic management team, to either come up with an economic recovery plan or resign.

Dubbed “Ghana Must Work”, the picketers marched from the Kawukudi Park towards 37 roundabout and continued to the Greater Accra Regional office of the Lands Commission and continued to the Cantoments Post Office and then ended at the Driver and Vehicle Licensing Authority (DVLA) Head Office in Cantoments, where the petition was received.


Mostly clad in red and black, the group carried placards with inscriptions that sought to portray their displeasure with regard to the Vice -President and administration not performing

The police coordinated with the leaders of the demonstration to direct both the protesters and vehicular traffic.

In spite of being largely peaceful, there were isolated instances were some individuals who allegedly were planted by the security forces were found and handed over to the police.

Regardless of the peaceful nature of the protest, riot police, clothed in full gear, were stationed at various points throughout the march.

Mr Biney, also popularly known as Chief Biney, said the petition was to heed to the call by President Nana Addo Dankwa Akufu- Addo to not be “spectators but citizens”.

Therefore, the protest, he said, was to serve as a wakeup call for the government, particularly, Dr Bawumia, to present a clear direction to revive the economy.

For his part, the National Youth Organiser of the NDC, George Opare Addo, said the protest was one of many to come.

He said the group would continue to protest until the economy was back on its feet adding: ”We are telling the President Akufo-Addo, we all know he was in notorious demonstrator but today, he is afraid of demonstrations.”

A Deputy Chief of Staff, Emmanuel Adumua-Bossman, who received the petition on behalf of the Dr Bawumia, said thanked the group for having a peaceful protest.

He therefore, assured Chief Biney and the group that the petition would be handed over to the Vice- President.