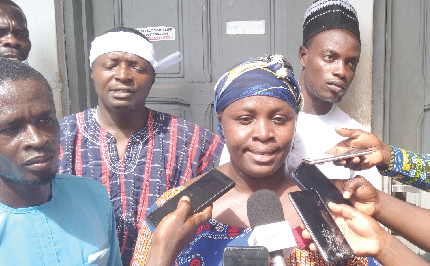 Ms. Janet Odoi Paintsil, DCE for Agona East, speaking to the media after her confirmation

Assembly members in the Agona East District in the Central Region at a special meeting last Saturday confirmed Ms. Janet Odoi Paintsil as the first woman District Chief Executive (DCE) for the area.

She replaces Madam Hannah Asamoah, who was not renominated by President Nana Addo Dankwa Akufo-Addo after she was rejected by the assembly members after polling 10 votes out of a total of 30 valid votes cast in an earlier election.

Since the creation of the district in 2008, all chief executives appointed to head the district assembly had been men.

The 33-year-old DCE, the youngest to occupy such a position in the district until her appointment, was the assembly member for the Ahoroso/Odumase electoral area at Agona Kwanyako and also a teacher at the Agona Nkranfo Basic School in the Agona West Municipality.

The election, which was conducted at the district assembly hall and supervised by officials of the Electoral Commission led by the electoral officer, Madam Patience Sherbrah, was very peaceful and smooth.

Other dignitaries included the former Minister of State in charge of Tertiary Education, Professor Kwesi Yankah, the immediate past DCE for the area, Mr. Dennis Armah-Frimpong and the Municipal Chief Executive (MCE) for Agona West Municipality, Mr. Evans Addison Coleman.

At the end of the election, out of the 30-member assembly, 25 voted in favour of the nominee, representing 83.3 per cent while five voted against her.

In her acceptance speech, Ms. Paintsil said her new portfolio came with a huge responsibility which required commitment to the development needs of the district.

“I am a unifier who is coming with the ultimate agenda to bring the best human and material resources to the district towards improving the living conditions of the ordinary people,” she said.

For his part, Osabarima Afriyie II entreated the new DCE, the assembly members and the staff of the assembly to work together to address the myriad of development challenges confronting the district.