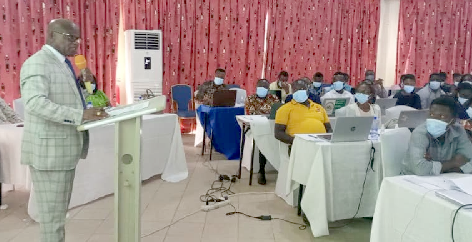 Ten Municipal and District Assemblies (MDAs) that did not meet their performance contracts for 2020 are to be sanctioned.

The rest are Amenfi Central, Juaben, Biakoye and Tempane districts.

It is also to develop competencies, increase job satisfaction and achieve the full potential of all staff in the service in line with section 54(f &c g) of the Local Governance Act, 2016 (Act 936).

The contract is operationalised through the Performance Management Instruments (Contract & Appraisal) in which the service enters into agreement and commitment with its employees to set clear, quantifiable objectives and indicators for attainment within given timelines.

The Head of the Local Government Service (LGS), Dr. Nana Ato Arthur, said the service in consultation with the board would come out with appropriate sanctions for the non-performing assemblies.

He was speaking at a workshop organised by the Local Government Service for about 70 statistical personnel of the various MMDAs in the Central and Western Regions in Elmina.

He said the Local Government Service remained the oil in the engine of growth and it was important that the assemblies were monitored and compelled to deliver to improve the socio-economic standards of the communities.

Touching on the workshop, he stated that data was essential for every development agenda, adding that it was important that statistical personnel were equipped with skills to sharpen their efficiencies.

He said the LGS appreciated the role of the statistical personnel and would continue to provide the requisite training for them.

Dr. Arthur warned the personnel against involvement in partisan politics saying the service would dismiss any personnel found to be actively involved in politics.

"Recently the service sacked six of its personnel for engaging in politics,” he said, and urged the personnel to stay politically neutral.

He advised the personnel to make their services relevant to the development agenda of their various district assemblies.