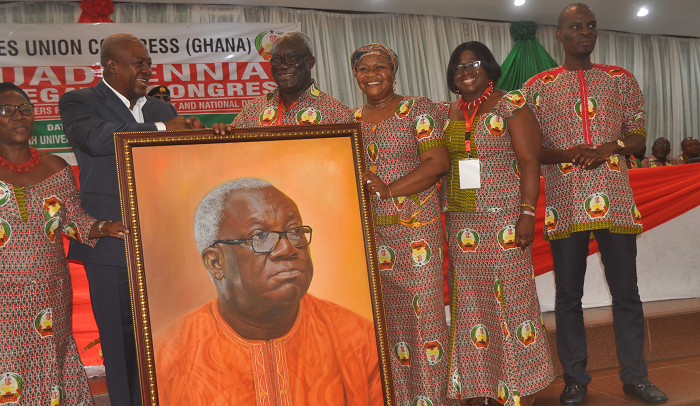 President Mahama (2nd left), on behalf of members of the TUC, presenting a portrait to Mr Kofi Asamoah (3rd left), Secretary-General, TUC, for his dedicated service, during the TUC’s 10th Quadrennial Delegates Congress in Kumasi. Those with them are Mr Haruna Iddrisu (right), the Minister of Employment and Labour Relations, and some members of the TUC. Picture: EMMANUEL BAAH Follow @Graphicgh

The Trades Union Congress (TUC) of Ghana wants the government to take a bold decision to withdraw from the International Monetary Fund (IMF) programme because of its negative impact on the lives of Ghanaians.

It said since the introduction of the three-year programme in 2015, many Ghanaians, including the working class, had continued to get poorer by the day and the situation could become disastrous if the programme was allowed to prevail.

The outgoing Secretary-General of the TUC, Mr Kofi Asamoah, who made the call at the 10th Quadrennial Delegates Conference of the congress in Kumasi yesterday, said the fallout from the programme included high interest rates, an unstable currency, unstable power supply, among other challenges.

But, responding to the TUC’s concern over the IMF programme, President Mahama said the current IMF programme would be the last one to be entered into by the country.

He said the three-year programme had helped to introduce stability into the economy, adding that many of the key areas of the programme had been implemented successfully.

The conference is on the theme: “Building workers’ power for decent work and national development.”

Mr Asamoah, who is ending his tenure as TUC boss at the end of the six-day conference, said in place of the IMF programme, the government should go in for home-grown policies that would stand the chance of turning the nation’s economy around and alleviating poverty.

Member unions are attending the conference to take stock of labour activities and plan for the next conference.

A new secretary-general is also expected to be elected at the end of the congress.

Mr Asamoah lamented over the current state of the economy which was making life much more difficult for the ordinary Ghanaian, resulting in plummeting living standards among the people.

In all that, he said, working people were the hardest hit.

He recounted how the various IMF programmes introduced in the country never worked and called for something to be done quickly to bring relief to the people of Ghana.

He said, for instance, that the IMF programme had led to the collapse of a number of industries in the country, leading to high unemployment.

Mr Asamoah stated that the TUC had, over the years, expressed its views on issues of national development as a way of enhancing policies of the government.

He pledged the continued support of the TUC in the formulation of national policies.

The outgoing Secretary-General said although the introduction of the Single Spine Salary Structure (SSSS) had brought some relief to Ghanaian workers, its real impact in terms of figures had declined.

He, therefore, called on the President to “do something” before things completely got out of hand.