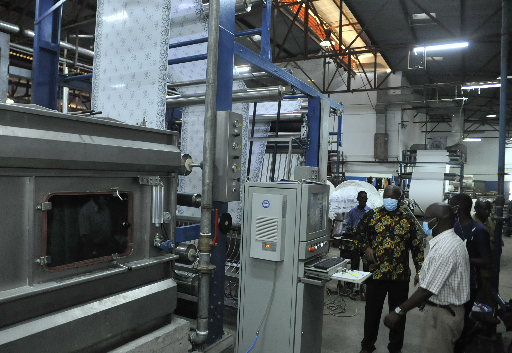 Four local textile manufacturers have appealed to the government to extend the zero-rate Value Added Tax (VAT) policy on the supply of locally manufactured textiles by 10 years.

The existing regime which is for a period of three years, was passed by Parliament in 2019 to help revive the local textile industry which was facing imminent collapse mainly because of the influx of pirated and cheap products onto the domestic market.

The policy is set to expire by the end of December, this year.

In a proposal sent to the Ministry of Finance through the Association of Ghana Industries (AGI), the textile companies said the zero VAT regime had breathed a new lease of life into their businesses for which reason an extension of the intervention was required to consolidate the gains.

They said although the Coronavirus (COVID-19) pandemic and its associated restrictions on social activities had affected their businesses, they had managed to plough back the windfall into retooling their companies and said a 10-year extension of the policy would help them to amortise.

They further estimated that the extention would help to grow the local textile printers market share from the current 20 per cent to 50 per cent and direct employment from 2,500 to over 5,500 by 2030.

Additionally, they said it would facilitate the creation of over 100,000 employment opportunities for cotton farmers, logistics companies and other service providers within the value chain.

"The extension of the VAT policy would also create more jobs in the garment sector by growing the number of garments we make from 160,000 pieces currently to over 2 million pieces by 2025; this will help us take advantage of the African Continental Free Trade Area (AfCFTA) and African Growth and Opportunity Act (AGOA)," they said.

The companies also projected that their contributions to the government revenue would grow by over 500 per cent by 2025.

According to the Managing Director of Printex, Mr. Moses Zizer, the respite his company got from policy in the midst of COVID-19 was enough evidence that given further opportunity, the industry would grow in leaps and bounds.

For instance, he said within the short period that the policy was implemented, Printex was able to purchase three modern machines to facilitate production.

Mr. Zizer further said with the extension, Volta Star Limited, which was the sole player in the spinning section of the industry, would expand and create more employment opportunities for cotton farmers.

"The garment sector will also benefit a lot if we are able to invest well and produce cheaply because of economies of scale,” he said, adding that “the 70 per cent of the market shares that had been lost to smuggling could also be reclaimed to save the government some revenue,” he added.