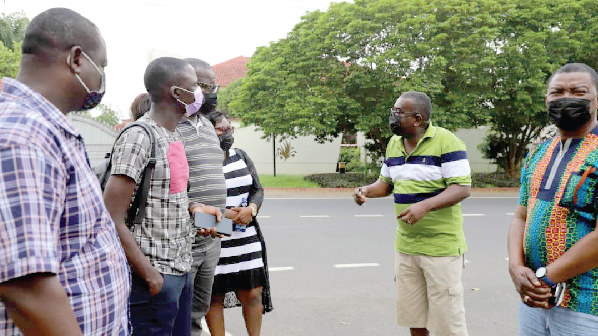 Mr. Tony Asare (2nd from right), a development consultant, speaking to some journalists of the Daily Graphic. With him is Mr. Kobby Asmah (right), Editor, Daily Graphic

A Development Consultant, Mr. Tony Asare, has called for the insulation of the National Development Planning Commission (NDPC) from political control to provide strategic direction for Ghana's development.

He said the current situation where the commission operated under the Presidency made it susceptible to political interference, thereby hampering the sustainable development of the country.

"The fact that the NDPC is under the Office of the President makes it a pseudo-political institution. We need strong advocacy for more independence for the NDPC, so that it can be likened to the Electoral Commission (EC) that is insulated from political interference.

“We need to look at this debate holistically, such that the NDPC can be positioned in a way that will make the country benefit," he added.

Mr. Asare, who is a Principal Architect at Tekton Consult, made the call in an interview with the Daily Graphic in Accra.

The NDPC Act, 1994 (Act 479) and the National Development Planning (System) Act, 1994 (Act 480) provide the core legal framework for the establishment of the NDPC and the performance of its functions.

The commission was established under articles 86 and 87 of the 1992 Constitution as part of the Executive arm of government and has the responsibility to advise the President on development planning policies and strategies.

Mr. Asare, who is also an architectural consultant, said the current arrangement where the Chairman of the NDPC was appointed by politicians made his or her tenure insecure.

He said constant changes in the leadership of the NDPC anytime political regimes changed were inimical to sustainable development planning.

"The fact is that by law, we should be able to review our zonal plans every 15 years and revise local plans every five years. If the NDPC were independent, we could do it such that the plans it would come up with as a national institution would tie into these milestones," the consultant said.

According to him, when the NDPC was made independent and also empowered, it could become the regulator of planning institutions.

Mr. Asare also said when the NDPC was made autonomous, it could develop a master plan to which political party manifestos could be aligned.

"Political manifestos do not cover only infrastructure; there are education, health, agriculture and many other issues, so if you know that there is a master plan, politicians can take a look at it and align their policies to it," he added.

The Executive Director for Research at DevtPlan Consult, Mr. Percy Anaab Bukari, said metropolitan, municipal and district assemblies (MMDAs) were key structures for the implementation of development policies at the local level and must, therefore, be made to perform those functions.

According to him, he had been monitoring the performance of MMDAs through the district league table initiative and seen the need for further building of the capacity of assembly members to deliver on their mandate.