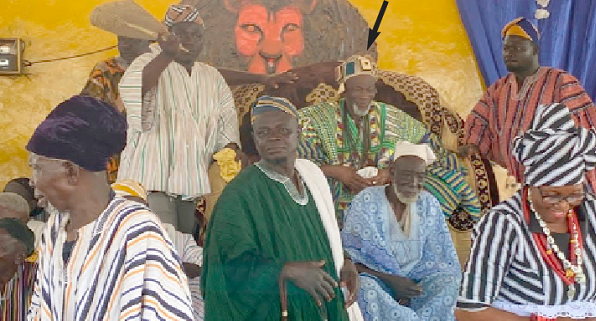 Ya-Na Abukari II (arrowed) sitting in state at the durbar

The entire ancient town of Yani (Yendi), the ‘nanship’ skin came to a standstill as hundreds of people from all walks of life from far and near trooped to Yendi, the traditional capital, to participate in this year’s Damba festival.

The atmosphere in and around the precincts of the Gbewaa Palace, the seat of the Dagbon King, which was the venue for the celebration, was filled with joy and excitement as the people paid homage to the Overlord, Ya-Na Abukari II, as part of the activities to mark the celebration.

The week-long festival was climaxed last Sunday with a grand durbar at the forecourt of the Palace with Ya-Na Abukari sitting in state to receive some important personalities, including Members of Parliament (MPs) from the Northern Region and heads of institutions.

Some indigenes on horseback displaying their riding skills at the durbar

The festival is celebrated to mark the birth and naming of Prophet Muhammad, but the actual content of the celebration is a glorification of chieftaincy.

Activities that mark the festival include prayers and fasting, as well as a procession of people on horseback, amid drumming and dancing.

There was so much fun and excitement at this year’s festival, as hundreds of people, made up of both revelers and residents, poured onto the road stretching from the centre of the Yendi Municipality to the Gbewaa Palace, causing a temporary traffic jam in the central business district.

Also, the rich cultural heritage of Dagbon was put on display as traditional rulers and some royals, dressed in their traditional apparel, rode on horsebacks.

Although the crowd was thick, the COVID-19 protocol of wearing face masks and regularly using hand sanitisers on the hands was adhered to.

The excitement and joy that filled the atmosphere also showed that the peace and unity that had been absent for some time had been restored and was being consolidated through the festive occasion that brought together the sons and daughters of Dagbon.

The Bapir Kar Naa (sub chief at the palace), who spoke on behalf of the Ya-Na, said the establishment of the Dagbon Development Fund (DDF) which he (Ya-Na) launched in the early part of October, this year, was to serve as a catalyst for the rebranding of the Dagbon chieftaincy institution and for the total transformation of the traditional area.

He stated that the DDF was a comprehensive plan that would alleviate the socio-economic challenges among people of the Dagbon traditional area, saying a strong financial management system had been put in place to ensure appropriate management of the Fund and also oversee the successful implementation of projects that would be proposed.

He called on all sons and daughters of the area, both home and abroad, corporate bodies, philanthropists and the government, to contribute to the Fund for the progress and total development of the area.

The Overlord of Dagbon urged the people to continue to live in peace and unity for the speedy development of the area.

The Northern Region Parliamentary Caucus, comprising members from both the Majority and Minority sides of Parliament, pledged to contribute an amount of GH¢100,000 to the Fund.

The Minority Leader and MP for Tamale South, Mr. Haruna Iddrisu, and a Deputy Minister of Transport and MP for Gushegu, Mr. Hassan Tampuli, both made the pledge on behalf of their colleagues.

Mr. Iddrisu, in a brief remark, commended the Ya-Na for the DDF that sought to mobilise resources for the development of the area.

Mr. Tampuli, who also represented the President, Nana Addo Dankwa Akufo-Addo, pledged the commitment of the government to the development of the area.