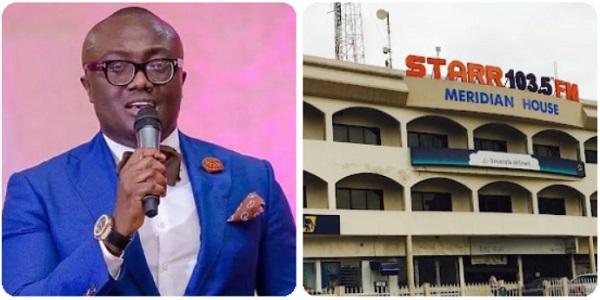 There is an uneasy calm at the Meridian House office which houses radio stations operating under the Excellence In Broadcasting Network group as an industrial action declared by some staff of the media company enters its third day.

Founded in 2014, all media houses under the EIB Network banner operate from Meridian House on the Ring Road in Accra except GHOne TV which operates from its head office at Platinum Place, Ridge, Accra.

The sit-down strike by some of the estimated 120 workers of the Network started on Monday (July 4, 2022) in protest over unpaid salaries.

A staff member who spoke to GraphicOnline on condition of anonymity said her salary has been in arrears for over a year but she knew of other colleagues who were owed 15 months of salary arrears.

Repeated attempts to reach the Human Resource/Administration Manager of EIB Network, Dorcas Kwao for comment were not successful.

The worker said on Monday some of her colleagues stayed away from the office entirely in protest of their predicament.

She also disclosed that the staff who stayed away from the office were on Tuesday presented with query letters by their line managers to explain their absence from the office.

However, the staff remain resolute and intend to continue their action till the end of the week when they hope to receive a favourable response from management.

There is no recognized staff union in the EIB group which includes Starr FM, GH One and Kasapa FM and this has led to a split among staff over the decision to strike.

Some staff, especially on-air personalities who are not in favour of the strike are carrying out their normal duties i.e. hosting the morning shows on radio and television while others including reporters are at work but not performing their assigned duties.

Another staff who spoke to GraphicOnline said the on-air personalities were not feeling the pinch because most of them had other "side-gigs and endorsements" which make up for their lack of a salary.

"For the staff who are full-time journalists, things have been very difficult for us because journalism is how we make our daily bread.

Meanwhile, reacting to the issue on Thursday (July 7, 2022), Dr Kwabena Duffuor, the owner of EIB Network said the staff of the company were owed "arrears not payments of salaries".

According to him the management of the company was seeing to it that the arrears would be paid soon.

Reacting to reports of the industrial action embarked upon by the staff this week, Dr Duffuor said the staff have been paid their salaries since January of this year.