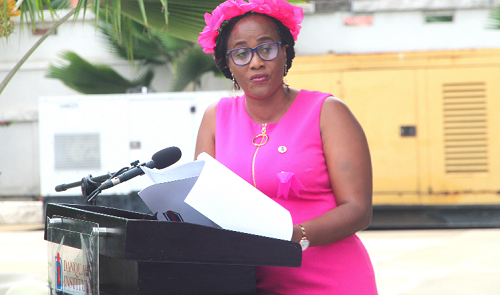 Tagging breast cancer as a spiritual disease by some prayer houses and churches is one of the major impediments turning victims of the disease away from seeking early medical attention, a Senior Lecturer with the Department of Surgery at the University of Ghana (UG) has said.

Dr Florence Dedey, who is also a surgeon at the Korle Bu Teaching Hospital, said with about 70 per cent of cases being detected only in the third and fourth stages of the disease, health-seeking behaviour remained relatively low.

Continuous spiritualisation of the disease, she said, would hamper efforts at getting potential victims to seek early medical attention.

“People tend to spiritualise the disease, and as a result, people think they do not need medical attention but prayer houses,” she said at a breast cancer awareness symposium organised by the Danquah Institute in Accra last Tuesday. Other panellists at the symposium were the former Ledzokuku Member of Parliament (MP) and Deputy Minister of Health, Dr Bernard Okoe-Boye; Founder of the Maud Lokko Breast Cancer Foundation, Mrs Susan Malik, and Dr Florence Agboadoy.

Dr Oko-Boye said while it was essential to review policies to reduce the cost of treating breast cancer, there was the need for the country to make breast examination part of its annual activities.

He said, for instance, that making breast cancer examination a prerequisite for job recruitment would help encourage more people to seek health care.

Dr Oko-Boye noted that collaboration, which was one of the major strategies used to address maternal mortality in the country, could also be employed to discourage victims of breast cancer from seeking help from prayer houses.

He further said as part of efforts to deepen the collaboration, prayer camps must also be sensitised to detecting early symptoms of breast cancer, adding that an incentive should also be made for these prayer houses to refer the victims to the hospital for early treatment in order to increase the number of victims that sought medical attention.

Mrs Malik, who is also a survivor of breast cancer, spoke about her journey.

Sharing her experience, she said, with the support of her family, she mentally prepared herself to seek treatment.

“I was not bothered when I saw it. I just decided that we were going to fight it and I must win,” she said.

She urged victims of the disease not to hesitate to seek medical attention as it would help to detect the disease before it got to its crucial stages.

For his part, Dr Agboadoy identified bloody nipple discharge, lump, nipple retraction, sores around the nipple as some of the symptoms of the disease.

He further underscored the need for continuous dialogue and awareness creation beyond the month of October to help increase health-seeking behaviour.