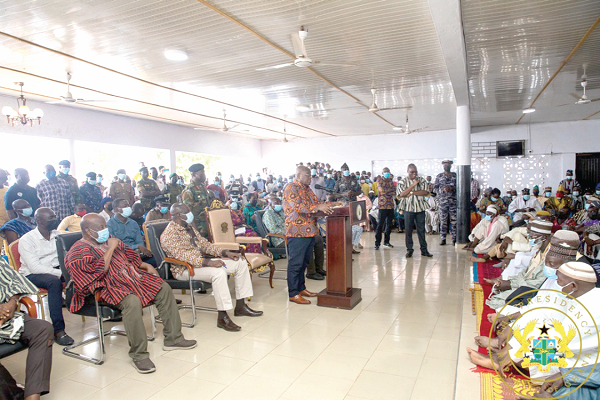 • The President addressing the chiefs and people of Wa

President Nana Addo Dankwa Akufo-Addo has appealed to the chiefs and people of the Upper West Region to put the unfortunate military brutalities in Wa behind them.

He said the prompt action of the Military High Command in meting out swift and punitive measures to the offenders should bring the matter to a close.

The President who made the appeal during a courtesy call on the Paramount Chief of the Wala Traditional Area, Naa Fuseini Seidu Pelpuo IV, at the start of his two-day tour of the region yesterday, further promised that the treatment and payment of medical bills of victims in the incident would be taken care of by the government.

He, however, said the military would continue to count on the support and cooperation of the people in the discharge of their duties, including the fight against terrorism which was plaguing the sub-region.

President Akufo-Addo, who was warmly welcomed by the people into the Wa municipality yesterday, said one of the reasons that necessitated his visit to the region was to learn at first hand the situation on the ground since the incident, and the challenges facing the people in the area.

He gave the assurance that the Wa Islamic Girls Senior High School would be fenced, adding that vehicles would also be provided to some educational institutions in the region to facilitate teaching and learning.

President Akufo-Addo, however, said he was disappointed with the outcome of results in the last general election in the region where the New Patriotic Party (NPP) lost two seats, stressing that the region was home to some of the party’s founding fathers.

He, however, thanked the chiefs, opinion leaders and the people for the warm welcome accorded him and his entourage.

Naa Pelpuo expressed appreciation to the President and the Military High Command at the Hippo Barracks in Wa for the swift discipline of the offending soldiers engaged in the disturbances which he said had since restored the peace and cordiality that existed between the citizens and the military.

He also thanked the President for coming to acquaint himself with their challenges and for the quick response to some requests he had earlier made to him.

Others were the construction of a dual carriageway in the town and the elevation of two health facilities to Polyclinics at Busa and Boli which were yet to be done.

He further appealed for the completion of a new market project, more social amenities and infrastructural facilities, including the renovation of the Wa Sports Stadium.