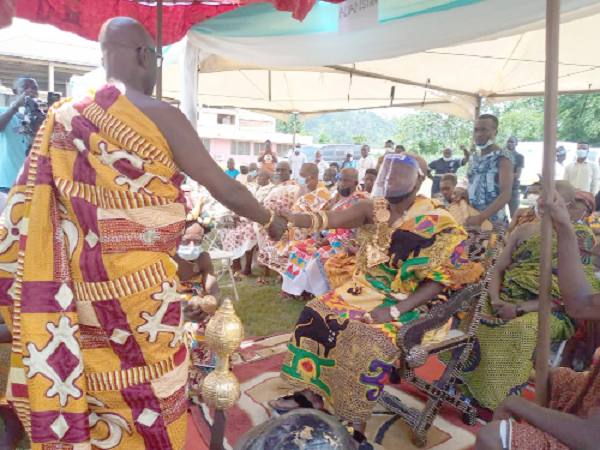 A former New Patriotic Party (NPP) Member of Parliament (MP) for the Akrofuom Constituency in the Ashanti Region, Mr Kwabena Appiah-Pinkrah, has been installed the Sompahene of the Adansi Traditional Area under the stool name, Nana Gyaben Akowuah I.

His installation last weekend is described by many as a reward for his years of allegiance and loyalty to the Adansihene, Opagyakotwere Bonsra Afriyie II, his transformational leadership style and support for the underprivileged.

The colourful ceremony which brought together people from all walks of life, including some friends from  the NPP, re-enacted the rich Asante culture, including drumming and dancing.

Clad in a colourful rich kente, the former MP, also a consultant, smiled occasionally and waved at the crowd.

"I thank God Almighty and most of all Nana Adansihene for honouring me with this stool to serve as Sompahene for Adansiman and I am very humbled.

"I have offered myself to serve, and I pray that the good Lord guides me along that path if it’s His will," he said at a durbar at Fomena.

The former MP said leadership should not be about position of power or occupancy but the desire to cause positive change in the society.

"I promise to transform the Sompahene stool and promote development," he added. He called on Adansiman to unite, build synergies and help one another to grow.

“Let’s all unite and develop Adansi because together we can make this place great," he added.

The Adansihene, Opagyakotwere Bonsra Afriyie II, urged the new Sompahene to continue with his hard work to benefit his subjects and the overall good of Fomena.

He further advised him to be ready to learn the rudiments of the chieftaincy institution and maintain his calm and humane traits.

The former NPP MP, a product of Fairleigh Dickinson University in the United States of America, was born on August 23, 1947.

He holds a Master of Arts degree in International Studies from the same university.

He also holds a diploma (higher-level degree) from the University of Bremen, West Germany.