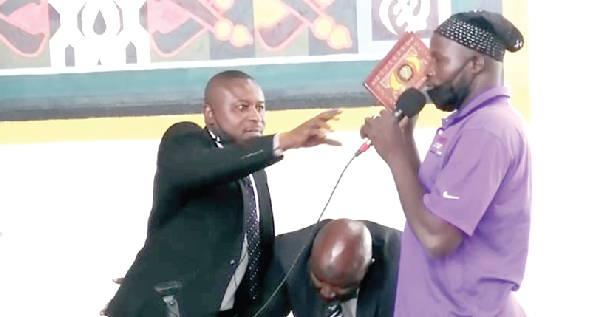 • Fuseini Ibrahim (right), swearing an oath before the committee

The father of one of the victims in the June 29, 2021 disturbances at Ejura in the Ashanti Region,  Mr Fuseini Ibrahim, yesterday told the committee investigating the disturbances that his wife, Sadia Fuseini, had to go into hiding since she alleged that it was Baba Iddi Mohammed, the elder brother of Ibrahim Mohammed, alias Kaaka, who killed the latter.

He said since the disclosure, some youth in the town had been threatening to kill his wife for telling “the truth”.

According to Mr Ibrahim, at the time of the incident, he was out of town but said his wife called to narrate everything she witnessed to him.

Initially, he said his wife, did not inform the police or the deceased family about what she saw in the early hours of Saturday, June 26, 2021 when Kaaka was attacked by some unknown assailants while returning home because, he, (the husband), was not around.

Mr Ibrahim said when he returned from his journey after three weeks, he accompanied his wife to the police station to lodge a complaint.

Since that day, Mr Ibrahim said, they have had no peace as his wife continue to receive threats from some youth, adding that it had also affected the cordial relationship between the family and their co-tenants.

In her testimony, Sadia Fuseini  confirmed her husband’s narration.

She said her prayer was that Kaaka would recover from his injuries to tell the world who his attackers were.

However, Ms Fuseini said when the news came out that Kaaka had passed on, she decided to spill the beans by letting the truth out after seeking the consent of her husband.

According to her, she was performing ablution on the faithful day when she heard the sound of Kaaka’s motorbike which was later followed by a loud thud.

Initially, she thought it was the motorbike that had fallen, but she later heard the groans of someone in pain and decided to come out to check.

According to her, when she came out, she saw someone dragging another person on the ground but since the place was dark, she could not identify the person.

The witness said it was when she got a bit closer that she recognised  the elder brother of Kaaka.

She claimed that she shouted and knocked on the door of Sahada, Kaaka’s wife to come out and witness the scene.

Ms Fuseini further alleged that it was when she was calling Sahada that Baba Iddi left Kaaka on the ground and fled.

She said a co-tenant, Muniratu Alhassan, who also came to testify, also saw Baba Iddi while on her way to the scene.

Earlier, the mother of one of the injured persons in the disturbances, Ms Salamatu Mohammed, appealed for support for her son who is undergoing treatment.

Ms Mohammed said her main concern was how her son, Misbawu Mohammed Awal, 16, was going to survive after losing a limb as a result of injuries he sustained in the disturbances.

The right leg of Awal, an apprentice mechanic, had been amputated after sustaining gunshot wounds.

According to the Medical Superintendent of the Ejura Government Hospital, Dr Mensah Manye, Awal sustained multiple fractures in his knee and the femoral bone in the right leg.

Ms Mohammed told the committee that Awal had requested money to buy food, but was  informed 10 minutes later that her son had been shot and rushed to the hospital.

Ms Mohammed said they initially went to the St John of God Hospital at Duayaw Nkwanta in the Ahafo Region, but were later referred to the Komfo Anokye Teaching Hospital (KATH) in Kumasi where the son’s leg was amputated.