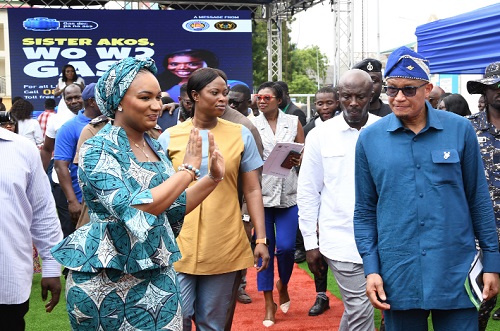 Samira Bawumia, second Lady (left) responding to cheers from some of the participants after the official launch of the LPG awareness campaign. With her is Dr Mustapha Abdul-Hamid (right), Chief Executive of NPA. Picture: EBOW HANSON
30.5k Shares

The National Petroleum Authority (NPA) has launched a nationwide sensitisation campaign to promote the use of Liquefied Petroleum Gas (LPG) as a safer and cleaner alternative to wood fuels.

Dubbed: “Wo wϽ Gas”, the campaign would focus on normalising the use of LPG as a lifestyle by using local languages such as Twi, Ga, Ewe and Hausa to educate the public on the safe use of LPG.

Various mediums such as flyers, stickers, printed T-shirts, pull up banners, billboards, radio jingles and TV commercials would also be employed for the campaign.

The campaign is being supported by the Ministry of Energy and the World Bank.

It forms part of the government's effort to ensure that at least 50 per cent of citizens use LPG by 2030.

The event, which was held in Accra yesterday, was attended by officials of NPA and other industry players, including representatives of the Ghana National Fire Service (GNFS) and the Brand Ambassador for the campaign, Deloris Frimpong Manso.

There were demonstrations by the fire officers on how to douse fire using a portable Co2 fire extinguisher and a fire blanket, among other safety measures.

The wife of the Vice-President, Samira Bawumia, who is a Global Champion for Clean Cooking Alliance and Health and Energy Platform for Action of the World Health Organisation (WHO), commended the Ministry of Energy and the NPA for the initiative to embark on the awareness creation campaign.

She said the country, since 1989, had rolled out several interventions to promote LPG as a clean cooking fuel, citing a recent LPG promotion programme and a cylinder recirculation model (CRM) initiatives.

"The simple act of cooking using unclean cooking solutions and fuels leads to household air pollution which is responsible for over 20,000 premature deaths annually in the country.

"We need to increase education on the safe use of LPG by including information on cylinder expiration dates and when to change or replace various LPG accessories," Mrs Bawumia said.

The Chief Executive Officer of the NPA, Dr Mustapha Abdul-Hamid, expressed the authority’s commitment to eradicate energy poverty and make LPG available, accessible and affordable to all.

He said his outfit and the Ministry of Energy were working on distributing cook stoves and cylinders to poor and vulnerable communities, including the setting up of LPG bottling plants in rural and peri-urban areas, while pledging to work on providing a tax holiday for such investors.

Dr Abdul-Hamid also said that the authority was working towards the removal of some taxes on LPG to bring down the cost of gas.

In a speech read on his behalf, the Minister of Energy, Dr Matthew Opoku Prempeh, said plans were underway to provide alternative livelihoods for families who depended on charcoal business activities.