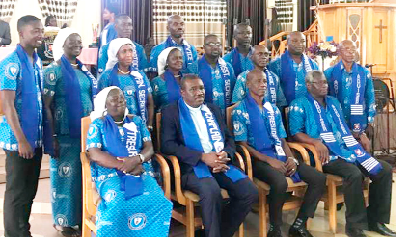 Members of the executive of the Ga Presbytery Singing Band Union of the Presbyterian Church of Ghana
30.5k Shares

The 15-member executive will hold office for the next three years.

The group is headed by Frank Antwi, President, and Daniel Anteh, Vice President.

The Ga Presbytery Director of Church Life and Nurture, Rev. Andrew Shardow, who performed the induction ceremony, said appointment of executives and committees in the Presbyterian Church of Ghana was biblical, constitutional and historical as well.

He explained that historically, Presbyterianism as a reform tradition, was a revolt against absolute government, and as such, the system of government was in the hands of ministers and elders in service of the congregation.

“This shows that the Presbyterian Church does not put power into the hands of one man, but those who have been elected to preside over that power,” he stated.

Rev. Shardow said the newly appointed executive should be reminded of the important quality of discipline as was expected of them, and that their authority was to serve and be responsible.

“Leadership is a trust to exercise authority to benefit the oppressed.

You should not oppress those who are under you, but work together to build the church,” he added.

He said although Presbyterianism was associated with authority, it was not power, and that authority in Presbyterianism embraced fatherly and motherly responsibility whose intention was to correct and not to destroy.

“It promote life and responsibility and involves accountability.

As Christians who always follow the preamble of the Church, you must always remember that Jesus came not to be served but to serve,” said Rev. Shardow.

He noted that committee members who performed badly would be replaced anytime within the tenure of office.

He said Presbyterianism was born out of criticism and protest, and, therefore, they needed to embrace criticism in the work of leadership.

That, he said, would help them to be aware of their achievements and shortcomings, and allow them to be more democratic.