Metro mass bus bursts into flames: All 23 onboard escape unhurt 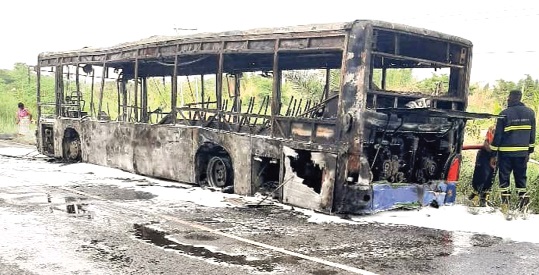 All the 23 passengers on board a Metro Mass Transit bus travelling from Accra to Ho escaped unhurt when it was suddenly gutted by fire last Saturday at a spot between Asikuma and Tsito.

Motorists and other eyewitnesses alerted the Police Highway Patrol Team and the nearby police barrier at Kporvi which in turn called the Ghana National Fire Service (GNFS).

Personnel of the GNFS responded swiftly and turned up at the scene to rescue the passengers from the burning bus with registration number, GR 1499-15, just in time before it burst into flames.

The Volta Regional Commander of the Motor Traffic and Transport Department (MTTD), Chief Superintendent Stephen Delaporte, told the Daily Graphic that the incident took place at about 3:20 p.m.

He said some of the passengers saw smoke emitting from the rear of the bus and alerted the driver who pulled up immediately.

“The driver, Thomas Avevor, then opened the engine compartment and realised that was the source of the smoke”, said Chief Superintendent Delaporte.

He said the belongings of some of the passengers were retrieved before the flame was put out.

Chief Superintendent Delaporte said the cause of the fire was not immediately known.

The MTTD, he said, had commenced investigations into the incident.