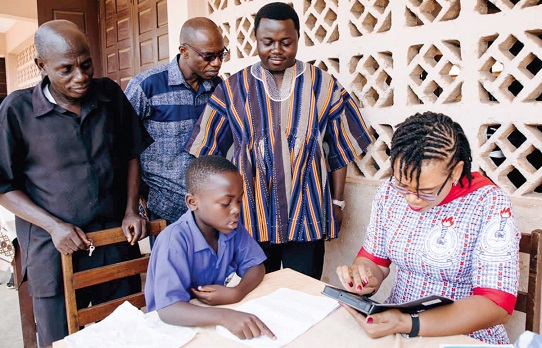 About 750,000 primary two pupils across the country have written this year’s edition of the National Standardised Test.

In all, a total of 18,000 public and private schools participated in the exercise which was administered by the National Council for Curriculum and Assessment (NaCCA), in collaboration with the Education Ministry.

The five days’ test which began on December, 5, this year, was supervised by 9,000 test administrators across the country.

The Deputy Minister of Education, Rev. John Ntim Fordjour, who spoke to the media after monitoring the exercise at some selected test centres in the Greater Accra Region, said the essence of the test was to ascertain the strengths and weaknesses of pupils in literacy and numeracy which are the foundational skills required for learning.

Some of the schools he visited were the Pennywise International and La-Presbyterian Basic schools in Accra.

According to Rev. Ntim Fordjour, the test was part of efforts to ensure that fundamental weaknesses in education were addressed.

He also said that the exercise was not meant to test to know which school was the best, but to ascertain the true state of affairs in the schools for appropriate interventions to be put in place.

Rev. Ntim Fordjour, who is also the Member of Parliament for Assin South in the Central Region, said the government, in collaboration with stakeholders, had rolled out other interventions in the education sector, all aimed at improving teaching and learning outcomes.

The deputy minister commended the leadership of NaCCA and other agencies, headteachers of participating schools and test administrators, among others, for their various roles in ensuring the successful conduct of the test.

The standardised test was first conducted in the country last year.

Data gathered from the test assisted the government in planning after finding out the state of affairs at that level of education in the country.

This year, private schools were also allowed to take part in the exercise even though some of them failed to submit the needed input to allow them to participate.