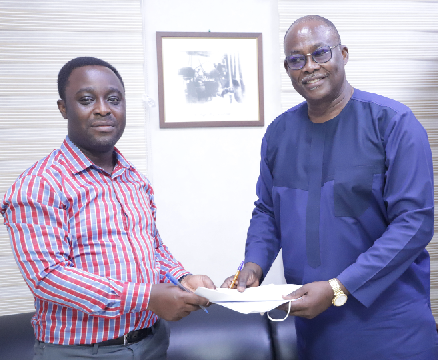 G-Pak Limited, a subsidiary of the Graphic Communications Group Limited (GCGL), yesterday signed a memorandum of understanding (MoU) with the African Business Centre for Developing Education (ABCDE) for the printing of a directory of scholarships for students.

The directory will, among other things, provide information on financial assistance, with the aim of helping persons desirous of pursuing further studies in various fields.

It is an initiative of the ABCDE, a non-governmental organisation which focuses on helping the business community deliver various services to the educational sector, with support from the GCGL.

The directory is expected to be out in about two weeks, after which it will be launched at the Ghana National Association of Teachers (GNAT) Hall in Accra.

At the signing ceremony, which took place at the GCGL Head Office, the Chairman of ABCDE, Dr. Ekwow Spio-Garbrah, a former Minister of Education, and Trade and Industry, signed for his organisation, while the acting Managing Director of G-Pak Limited, Mr. Kingsley Mate-Kole, initialled for the company.

Dr. Spio-Garbrah said the ABCDE was coming out with the directory to provide support for people who wanted to improve themselves through education.

“My role in helping people find financial assistance for education began when I led a team to establish the Ghana Education Trust Fund in 2000, which is on record to have helped mobilise more than $1 billion over the last 20 years to support all kinds of educational interventions in the country,” he said.

He said the directory was the next phase of what he tried to do as Minister of Education about 20 years ago, hence the establishment of the ABCDE, “where our normal activities include helping students with mentorship by going to second-cycle schools and universities to talk to students”.

Dr. Spio-Garbrah said that involved the use of professionals in certain fields to share knowledge and experiences with students who wanted to be in those fields.

Moreover, he said, the ABCDE held conferences and events, the most recent one being the engagement of stakeholders on the importance and merit in getting students and children to learn about chocolate making.

At the initial stages, 2,000 copies of the directory would be printed, after which it would be increased in order to reach out to a lot of people, he said.

According to him, the organisation was trying to solve the problem of unemployment, which was a nationwide issue.

“We are trying to solve a problem which is nationwide — unemployment among young people,” he said.

Mr. Mate-Kole, for his part, said G-Pak’s main job was to print and do packaging.

“We see this as an opportunity to help the young ones to have direction as to where they can pursue their future goals. We will give them the best printout, so that they can enjoy reading the directory,” he said.

G-Pak, he said, was known for quality, and it was something it would live up to in undertaking the project.