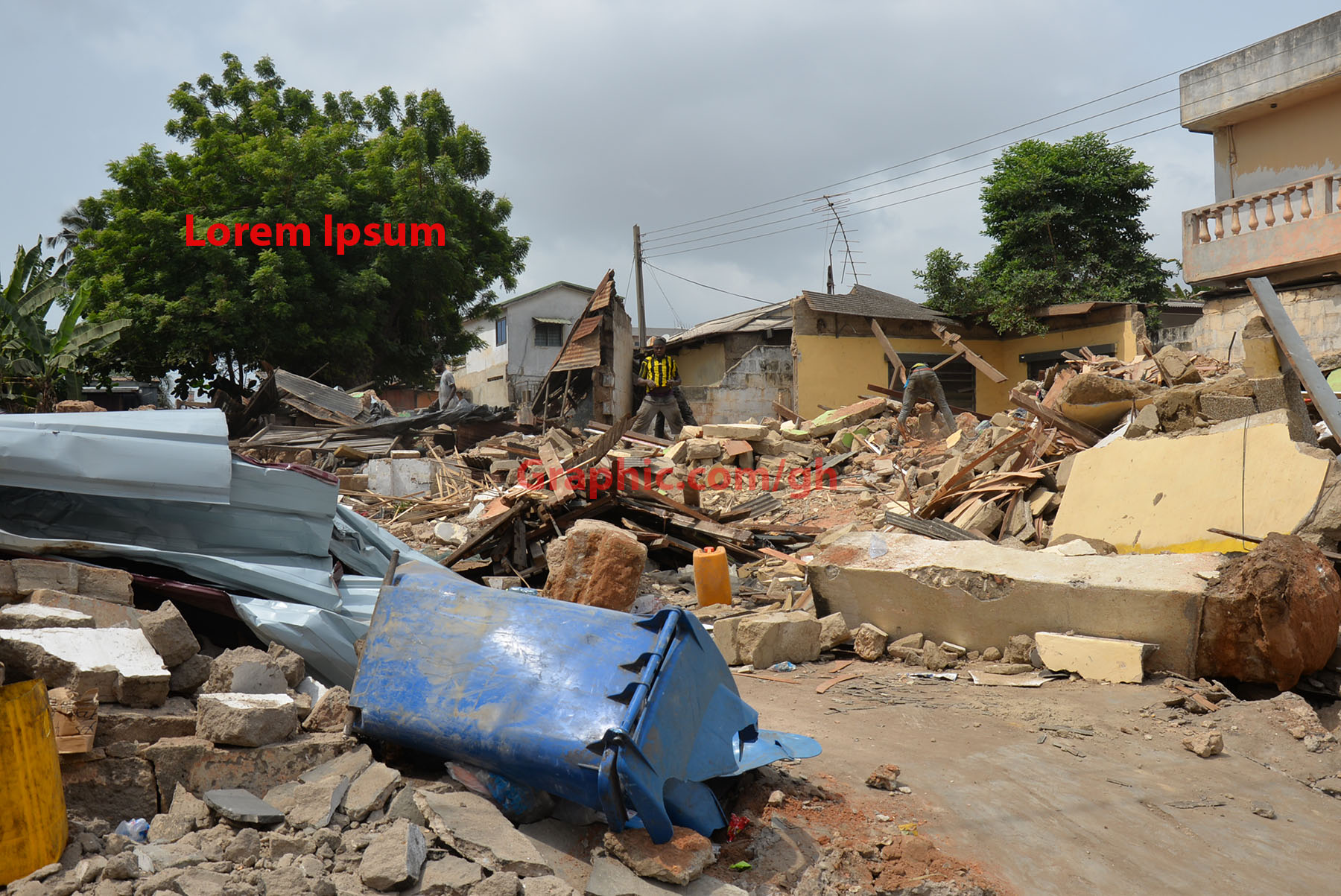 Six residential structures within the Abossey Okai spare parts market in Accra have been demolished allegedly by the Ablekuma Central Municipal Assembly.

The exercise is said to have commenced at about 3:30 a.m. yesterday dawn, rendering more than 35 families, including children, homeless.

When the Daily Graphic got to the scene, a three-bedroom house, a mud house and three other concrete structures had been razed to the ground.

Properties, including home appliances, clothing, auto spare parts and furniture, were lost in the exercise.

The affected families were seen salvaging what they could from the debris.

They claimed they were not given enough time to move out before their residences were demolished.

A resident at Abossey Okai and an eye-witness, Mr Vance Abossey, said the demolishers were assisted by armed police officers who stormed the homes and ordered the occupants to move out.

He said residents who delayed in moving out almost had the buildings collapsing on them.

He described the houses that were pulled down as family homes that had been standing for more than 100 years until 2017 when some men alleging to be from the Ablekuma Central Municipal Assembly earmarked them for demolition.

“The men visited here regularly a few months ago and verbally informed the residents that their homes will be demolished to pave the way for a road construction project,” he said.

He expressed his disappointment over the failure of those responsible for the demolition of the houses to do the right thing by notifying the victims formally.

Mr Abossey also expressed doubts about the reasons given for tearing down the buildings.

He urged the government to intervene since the affected residents had nowhere to go.

A victim of the demolition exercise, Ernestina Agyekum, who is a mother of six, could not control her tears as she narrated her ordeal to the Daily Graphic.

“Apart from losing my property, I almost lost my children as they were in the room when the exercise began,” she said.

Ms Agyekum said prior to the event they were informed verbally by a group of men that a mud house in the vicinity was the target for demolition since it was old and unsafe for habitation.

She said the men came back later with a different reason and said there were other houses to also be demolished for a road construction project.

“Now, my children are not able to go to school since their school items have all been destroyed. I also have to think of a way to repay loans I have taken from the bank for my business,” she said.

A 32-year-old woman, who said she was a single parent, also said she lost her three-bedroom house and a food business in the exercise. She maintained that the victims were not given any formal notice to quit before the houses were demolished and they had not also been assured of any compensation.

Another resident, Mr Joseph Atsu, said he lost auto spare parts worth thousands of Ghana cedis in the exercise and appealed to the government to intervene, adding that they had not been treated fairly.

When the Ablekuma Central Municipal Assembly was contacted by the Daily Graphic, officials confirmed undertaking the demolition exercise but declined to comment further.

An engineer at the assembly, who introduced himself only as Justice, demanded a formal letter before he would speak to the issue.