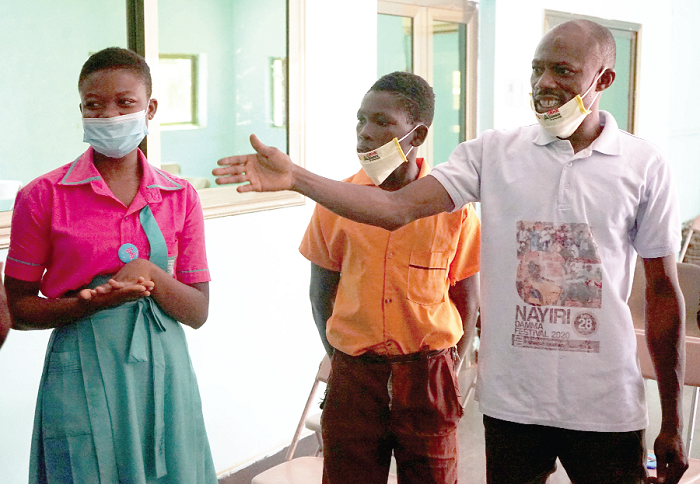 In Ghana, measures have been taken to curtail sexual and gender-based violence including the Domestic Violence Act (Act 732), which seeks to address all forms of violence against women and girls.

Yet, Ghana’s statement at the 57th Session of the United Nations Commission on the state of women revealed that 14 per cent and 52 per cent of girls in school are victims of sexual abuse and gender-based violence respectively.

The Equal Rights and Opportunities Project (EROP) launched on January 27, 2021 at the East Mamprusi Municipality in the North-East Region is one of the recent and robust interventions which seek to eliminate the numerous human rights challenges of women and girls in five selected communities (Gambaga, Langbinsi, Gbangu, Sakogu and Nalerigu).

The project is being implemented by Savana Signatures as a member of the Ghana SRHR Alliance (GH Alliance), Africa Centre for Human Rights and Sustainable Development (AfCHuRSD) and Women in Need (WIN) with funding from the Dutch Ministry of Foreign Affairs in Ghana.

As part of the project strategies, community members and leaders, religious leaders, teachers and students were brought together from the five selected communities and trained on protective mechanisms and empowering the girl-child by providing her opportunities and a safer environment to thrive.

Cynthia Ayamdavla, a student of the Gambaga Girls Junior High School, during the training said she thought issues such as rape and forced marriages happening in her community was limited to the community members to handle.

“Perpetrators of SGBV cases in my community do not face justice because such cases are usually handled between the victim and the perpetrator’s families instead of involving social justice institutions. I did not know I could involve social justice institutions such as the Domestic Violence and Victim Support Unit or call the Sexual Health Education Plus (SHE+) for help,” she added.

Cynthia is now a member of the EROP support clubs formed under the EROP project in schools in the North-East Region. Her dream is to become an engineer.
Vincentia A. Anokanko, a student of the Gambaga Girls Junior High School, lauded the initiative and expressed optimism of achieving her dream of becoming a lawyer.

“I can now protect myself from SGBV by reaching out to the DOVVSU or SHE+ for help. I will have a sound mind to study and attain my dream without any abuses that could truncate it,” she stated.

She thanked Savana Signatures for helping them form student clubs that would empower them and other girls to defend their rights in their school and communities.

During the training, the East Mumprusi Municipal Guidance and Counselling Coordinator, Rev. Grace Ato Wuni, called for regular meetings between parents, community leaders and teachers on issues of SGBV. That, according to her, would stimulate dialogue about the need to collectively fight SGBV and support the girl-child to achieve her dreams.

“There is the need to have SGBV dialogue that targets both genders. However, emphasis should be on the girl-child, including empowering her to stand up against abusers, as well as make informed decisions,” she said.

She said more girls were dropping out of school than boys because of child marriages and unplanned pregnancies, hence the need to pay more attention to girls.

The initiative culminated in the formation of the EROP Support Clubs consisting of diverse stakeholders. These support clubs are stationed in the selected communities to respond to issues of SGBV, as well as support schools and communities to fight the menaces.

Shaibu Abdulai, the Headmaster of Gbangu JHS, said his school had been bedevilled with issues of SGBV as they experienced an increase in school dropouts among girls due to forced marriages.

“I often come to school and hear about some of my students not continuing their education because they have been given out for marriage. The EROP Support Clubs formation is timely and will help us prevent these menaces. There is no fear when the school has the backing of all stakeholders,” he added.

He called on the Ghana Education Service to help them adequately resource the guidance and counselling units in schools to help them succeed.