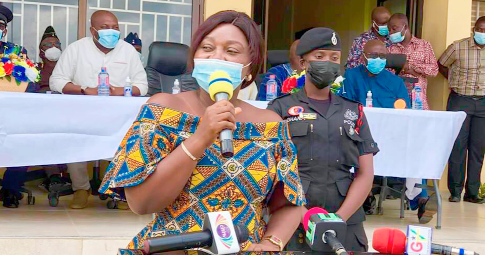 Mrs Assan addressing the members of the assembly

The Central Regional Minister, Mrs Justina Marigold Assan, has pledged to initiate moves to resolve the longstanding border dispute between the Awutu Senya East Municipal and the Ga South assemblies.

The Ga South Assembly in the Greater Accra Region shares an undefined border with the Awutu-Senya East Assembly in the Central Region, which is creating tension between the two assemblies.

The issue came up when Mrs Assan and her entourage, including officials from the Central Regional Coordinating Council, met with members of the Awutu-Senya East Assembly last Wednesday as part of her regional tour.

Mrs Assan said the situation was depriving the Awutu Senya East Municipal Assembly from generating revenue from some areas in its jurisdiction and could as well escalate into a worrying development which could disturb the peace of both regions.

“The situation needs to be resolved immediately and I will take the necessary steps to ensure that peace prevails,” she stated.

“I think the sector minister is very much interested in resolving this and I will also have a discussion with the Greater Accra Regional minister to resolve this,” she added.

During an open forum, some members of the assembly revealed that they had complaints from residents that whenever they had issues in the area, they were mostly directed to the police in the Ga South Municipal Assembly.

That, they said, was worrying and “it looked as if the police in the area were tilted towards Ga South”.

She expressed concern about the situation and urged the Police Commander to review the position of his personnel, adding that “how on earth do you have issues in the Central Region and direct it to GA South? I’ll plead with you the commander to talk to your men.”

Mrs Assan urged the assembly to devise innovative ways of increasing its revenue base while underscoring the importance of capacity building.

She said that would empower members to facilitate the assembly’s quest to position itself as one of the key drivers for economic development in the country.

She advised the management to factor in capacity building for junior staff to enable them to have a balanced set of human resource.

Mrs Assan urged the staff to correct tendencies that could slow down their work laying emphasis on lateness and politicisation of issues.

“While we are looking up to management to provide us with the necessary logistics, let us also do away with tendencies that hinder progress, especially playing politics with what we do.

“You are technocrats and not politicians,” she stated.