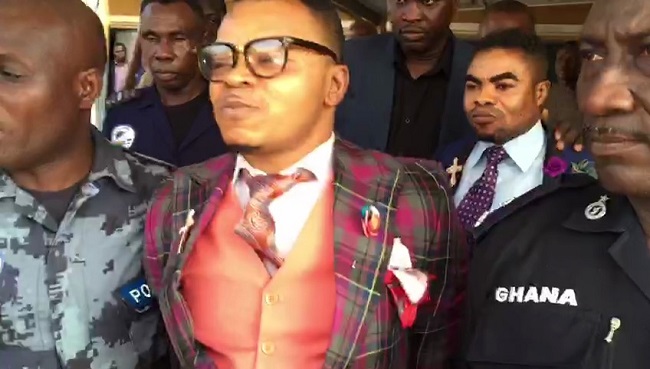 FLASHBACK: Obinim being escorted to court

The Accra Circuit Court has fined Bishop Daniel Obinim, and two of his pastors a total of Gh₡12,000 for assaulting two teenagers during a church service in August 2016.

‘Angel’ Obinim was slapped with fine and will serve 6 months in default, while the two pastors - Pastor Kingsley Baah and Solomon Abraham were also fined Gh₡3,600 each.

Failure to pay the fine will see them serve three months in prison.

The presided over by Abena Oppong Adjin Doku, also ordered the three convicts to sign a bond to be of good for 12 months.

Any breach of the bond will land the three men an additional three months in jail.

The court slapped the three men with the fine after they changed their plea of not guilty to guilty.

According to the prosecution, the incident was reported to the police by a legal practitioner.

It said the two victims, aged 16 and 14, were Bishop Obinim’s adopted children.

On August 17, 2016, the prosecution explained that during a church service, Bishop Obinim claimed he had a revelation from God that the two victims had been engaged in premarital sex, resulting in a pregnancy

Bishop Obinim announced that he had been directed by the Holy Spirit to chastise them in front of the whole congregation.

“He immediately subjected the two victims to serious beatings with his black leather belt, in the full glare of the congregation,’’ it said

According to the prosecution, Bishop Obinim was assisted to indulge in the act by Pastor Baah and Pastor Abraham.

“Pastor Baah held the girl and prevented her from running away, while Bishop Obinim continued to beat her. When she could not bear the pain anymore, she sought refuge with Bishop Obinim’s wife, Florence Obinim,’’ it explained.

The prosecution added that Pastor Abraham brought the girl back for Bishop Obinim to continue with the beating.

“Bishop Obinim, assisted by the two pastors, continued to physically abuse the two teenagers till they were satisfied before releasing them,’’ it said

The incident was broadcast live on OBTV, which belongs to Obinim.