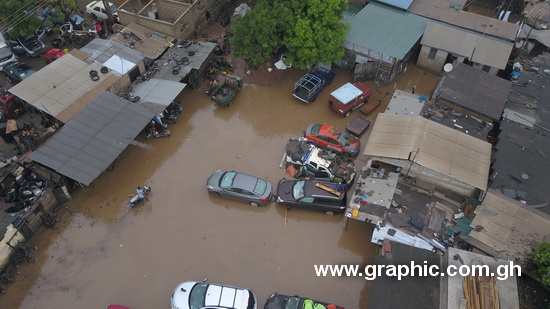 Homes, offices and shops in the busy Accra suburb of Odawna which adjoins Adabraka in the Klottey Korle Constituency were reduced to streams after some minutes of rains Wednesday afternoon.

The community’s many link roads and alleys were heavily flooded, rendering the roads impassable. A police rapid response team strategically parked at a safe point in the floods and flashed its emergency vehicle lighting to ward off any hero-seeking driver not to attempt wading through hazard.

Many drivers and commuters in nearby communities were also forced to make long detours or had to park and wait till the floods receded.

Odawna is home to many auto companies and garages, and the annual floods leave in their wake tales of destruction and sometimes deaths.

Member of Parliament for the constituency, Dr. Zanetor Rawlings, in the company of the Municipal Chief Executive and officials of the National Disaster Management Organisation were in the community to witness the precarious situation the people face.

Many had been evacuated from their homes where the floods had trapped them. 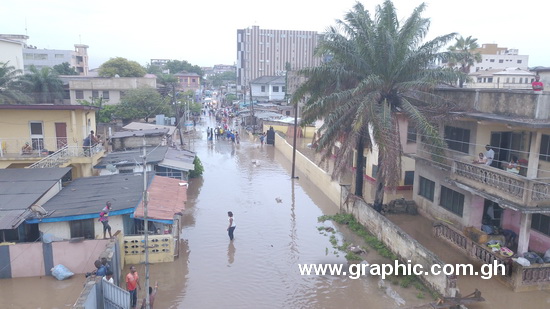 She said “The bottom line is that we cannot keep doing this. People’s lives are at risk, people’s property is completely being destroyed, their livelihood being destroyed. People are struggling and it is not right. It is time for real action to fix the problem permanently.”

The Member of Parliament urged the government and the city authorities to take pre-season dredging more serious as the spate of dredging when the rains start is almost suicidal. She said the fact that the dredging is going on now, albeit intermittently is an indictment on all the relevant authorities and unfair to all living in the flood prone areas.