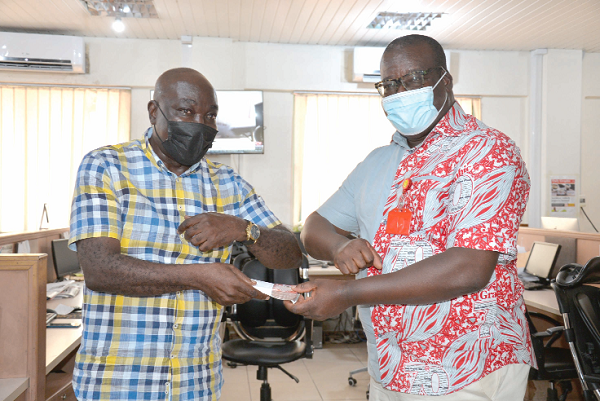 Eighteen-year-old Edward Elorm Gbanaglo can now focus on attaining his dream of training at the University of Health and Allied Sciences in Ho in the Volta Region to become a medical doctor.

This follows the decision by the Managing Director of Abyak Pharma Ltd, Mr Thomas Mensah, to pay off the remaining five years tuition fees at the medical school for Elorm, amounting to GH¢50,000.

The amount complements an amount of GH¢2,000 he had presented earlier as his contribution towards the education of the medical student and brings his total contribution to GH¢52,000.

Presenting a cash of GH¢20,000 and a cheque for GH¢30,000 to the Graphic Needy Fund for Elorm last Friday, Mr Mensah said supporting Elorm, “is not to bless him only but also bless the entire society.”

He said he was deeply touched by Elorm’s story in the Daily Graphic and the appeal for funds to enable him to realise his dream of becoming a medical doctor.

Mr Mensah said he initially donated GH¢2,000 but felt later on that he could do better than that, adding that when he heard Elorm had paid the fees for his first year in school, “I decided to pay the remaining five years’ tuition fees of GH¢50,000.”

The Deputy Editor of the Daily Graphic, Mr Theophilus Yartey, who received the donation, expressed his gratitude to Mr Mensah for keeping Elorm’s ambition alive.

He said the money was not meant to only pay for the tuition fees, but “it will indeed change Elorm’s destiny and that of his family and future generations because he is going to be a medical doctor and he is going to save lives. So, we can call you a life saver.”

Elorm gained admission to the university to study medicine but feared he might not be able to complete medical school because he did not have a constant source of funding.

He completed the Presbyterian Boys’ Senior High School (PRESEC) with six A1s and two B2s, and gained admission to the University of Health and Allied Sciences in Ho and with the help of his late mother’s friends was able to pay his admission fees.

Uncertain of his future and that of his two brothers, Elorm visited the offices of the Daily Graphic to appeal to benevolent individuals to help him realise his dream of becoming a medical doctor and also help his two brothers to complete school and climb up the educational ladder.

After both parents  passed on, the brothers are being raised by their grandmother, Mrs Josephine Gbanaglo, who is now indisposed.

The Daily Graphic is currently arranging for a Trustee Bank Account to be opened in the name of Elorm and his siblings. In the meantime, all who wish to support the Gbanaglos could channel their support through the Graphic Needy Fund Momo Account 0245311063.