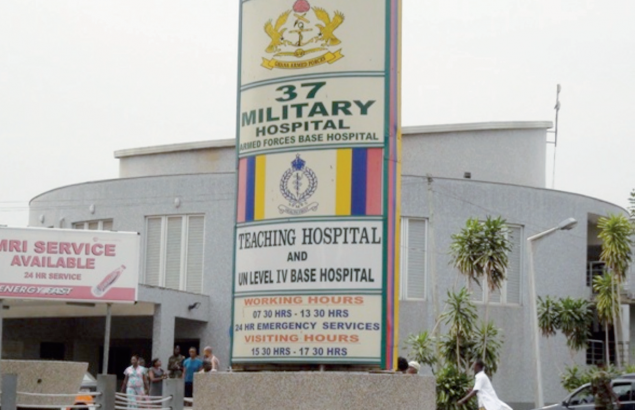 The Accra High Court has awarded damages in the sum of GH¢1, 075, 000 against the 37 Military Hospital for causing a 27-year-old Doctor of Philosophy (PhD) student to bleed profusely to death shortly after she went into labour in 2015.

In a ruling yesterday, the court, presided over by Justice Kweku Tawiah Ackaah-Boafo, held that the death of Mrs Helena Abrema Nyamekye could have been prevented.

“Indeed, as ably demonstrated in this judgment, what happened to the deceased at the 37 Military Hospital certainly fell short of the basic standards required of skilled doctors,” Justice Ackaah-Boafo stated.

Mrs Nyamekye was said to have lost over 1.5 litres of blood, since "no proper plan” was put in place to monitor her even though the hospital knew about her situation.

Details of the damages were a damage cost of GH¢400, 000 each to the deceased’s father, and husband (Captain Nyamekye of the Ghana Armed Forces) for loss of expectations of life; GH¢ 50,000 for mental distress; GH¢100, 000 to the baby for a deformity caused to his right arm as a result of the medical negligence; GH¢50,000 for pain, GH¢50, 000 to the deceased’s husband for primary care given to the child, and GH¢ 25, 000 for plaintiffs’ cost against the defendants.

Until her death, Mrs Nyamekye was a PhD student in Molecular Cell Biology at the University of Ghana.

The deceased’s father and her husband, who caused the legal action against the 37 Military Hospital, said on November 10, 2015, she was admitted for delivery as a result of a pregnancy-induced high blood pressure .

The plaintiffs in their suit further averred that the couple, after discussions with the doctor attending to them, decided to opt for a Caesarean section as their preferred mode of delivery.

According to the plaintiffs, despite the choice of a caesarean section, the medical team attending to them at the 37 Military Hospital opted for induced labour.

That decision, according to them, was a breach of care owed to the deceased by the hospital.

It was the case of the plaintiffs that the deceased and her husband persistently requested that their baby be delivered through a Caesarean section but the medical team attending to them refused their request and continued with the induction of labour, a situation which put Mrs Nyamekye through unbearable pain.

According to the plaintiffs, the pain endured by the woman eventually led to a traumatic delivery and the said delivery caused trauma to her and her child.

The baby, according to the plaintiffs, suffered a deformity on the right arm as a result of the negligence of the team at the 37 Military Hospital and he had to be sent to the neonatal intensive care unit.

They further told the court in their suit that the deceased was left unattended to and as a result, bled till she was subsequently taken to the theatre where she died.

It was based on these facts that the plaintiffs filed a civil suit of medical negligence against the hospital seeking damages for loss of life to Mrs Nyamekye, and for the pain and suffering she went through as a result.

As part of their reliefs, they also asked for damages for trauma negligently caused to the infant, and permanent deformity of the right arm as well as a cost of legal services as far as the suit was concerned.

The hospital, in its defence, denied the claims made by the plaintiffs, saying, “the decision to adopt vaginal delivery was the best and appropriate option for the deceased who at that time consented with her husband to vaginal delivery”.

Furthermore, the hospital argued that it was when the delivery was in process that Mrs Nyamekye’s husband sent a text message to the medical doctor who was in charge of the woman to opt for a Caesarean section.

Besides, the hospital stated that the baby was born with the umbilical cord around his neck and that was immediately detached by the medical team.

Also, according to the hospital, the right arm of the infant, which suffered a deformity, had been corrected based on an updated report from the paediatric department of the 37 Military Hospital.

Justice Ackaah-Boafo in his judgment said the hospital’s own witnesses, who were experts in the field, conceded their errors under cross-examination by the plaintiffs’ lawyers.

“The evidence available before this court points to the irresistible conclusion that the deceased’s death was a direct consequence of the hospital’s breach of duty to the deceased and her husband,” he said.

Again, the court, in its analysis of the facts before it, held that the medical team had no justification to refuse to accede to the request for a Caesarean section.

The court held that by not making blood available for a patient who was diagnosed with pregnancy-induced hypertension at the time she was induced to labour and also in the theatre, was reckless and negligent.

“It is my finding that the 37 Military Hospital is vicariously liable for the negligent acts of its staff,” Justice Ackaah-Boafo stated.