2 Brothers, 1 other drown in abandoned pit 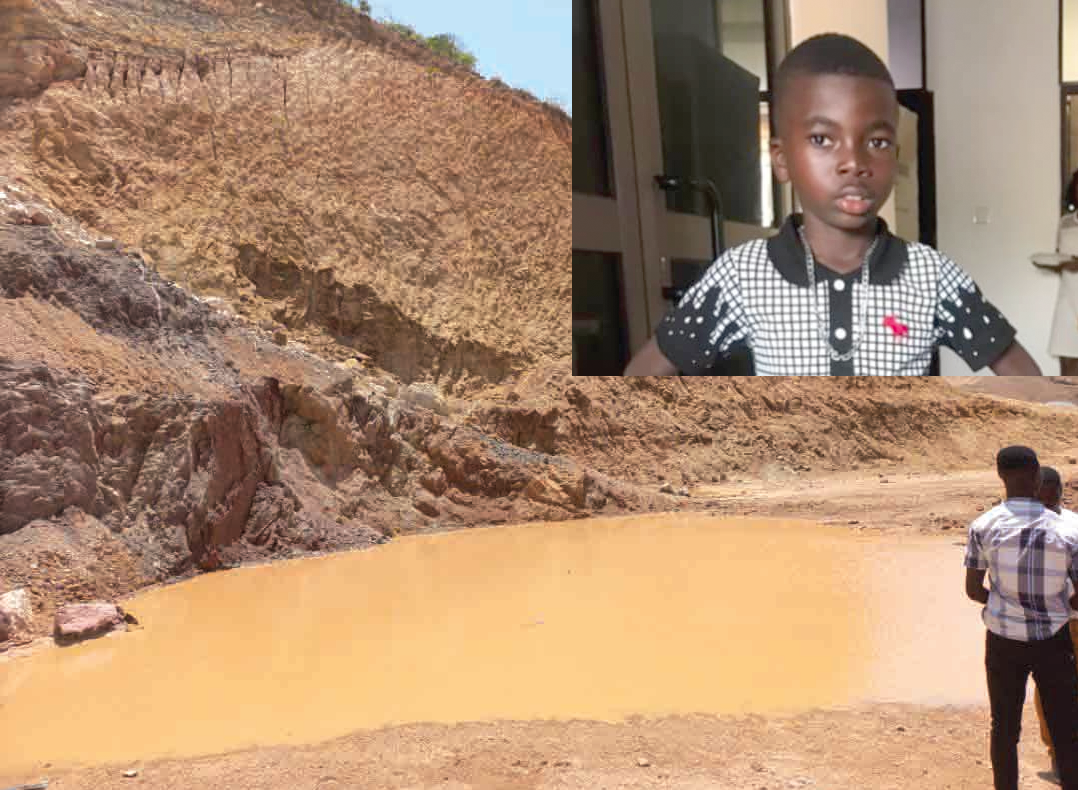 The pit in which the boys got drowned. INSET: Isaac Among, one of the victims Follow @Graphicgh

Three boys, aged between seven and nine, have drowned in a pit at Tuba in the Ga South municipality in the Greater Accra Region.

They are Isaac Among, 8, and siblings Elisha Kakra Adu-Noah, 9, and Samuel Tawiah Adjei-Mensah, 6.

The children had left home to play around Mountain View at Tuba last Saturday morning and decided to wash down in a pit created by rainwater from a ridge.

The top soil at the area had been removed as a result of illegal sand and gravel winning activities.

Unknown to the children, a mudslide had created the pit, making the base muddy, a development which made it difficult for them to swim out of the stagnant water in the pit.

Their bodies have been deposited at the morgue for autopsy and investigations by the police.

The Ga South Municipal Assembly stopped the illegal sand winning activities about two years ago, but the vast parcel of disturbed land lies precariously with many death traps, especially during the rainy season.

Narrating the incident to the delegation, an uncle of Among’s, Emmanuel Asamoah, said the three children had gone out to swim in the water that had collected in the pit from the torrential rain that came down from the steep hill.

He said although the pit was not big, the boys got stuck in it due to the mud that had collected in it.

At Kakra and Tawiah’s residence, the delegation held interactions with the family and was also briefed.

Their aunt, Mercy Opoku, told the delegation that when information got to them that the children were suspected tobe stuck in the pit, she went to the area and  nearly lost her life in the process of searching for them.

She said the first few steps she took into the pit brought the water level to her neck, forcing her to withdraw.

Mr Stephen told the Daily Graphic that he had visited the area with his security team last Thursday as part of long-term measure to monitor the area to ensure that sand winning did not return to the place.

He said news of the children’s drowning, therefore, came to him as a surprise.

He said the assembly was liaising with other governmental agencies to ensure that the dangerous parts of the area, especially the trenches and the hanging ridges, were levelled to avoid any danger to residents.

Mr Stephen expressed the condolences of the government and the assembly to the bereaved families and assured them that, together with the MP, the assembly would bear the cost of burial and other expenses that might crop up.

For his part, Mr Tetteh described the incident as heart-wrenching and devastating but urged the families to take heart.

He consoled the families and prayed for God’s mercy for them during the troubling time.

He said he would raise the issue with the Minerals Commission and the National Disaster Management Organisation for the swift removal of the ridges created by sand winning activities.

A resident, Rebecca Duncan, who spoke with the Daily Graphic, commended the bold decision by the assembly to halt sand winning activities in the area.

“But for that, a lot of such trenches would have been created which might have caused more of such unfortunate incidents,” she added.