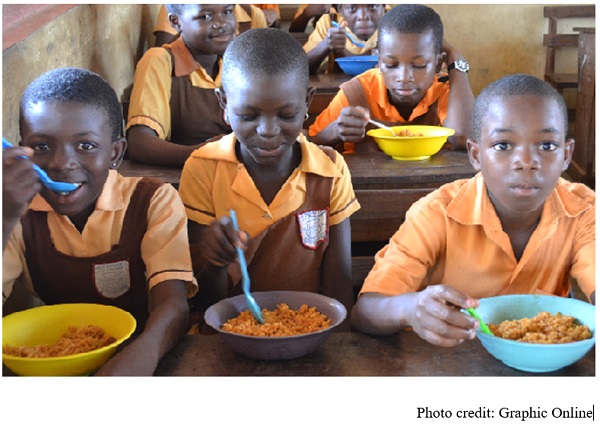 Many schoolchildren across the country could not enjoy their daily hot meal yesterday, following a strike by caterers of the Ghana School Feeding Programme (GSFP).

They vowed to continue the boycott until their concerns were addressed.

Indeed, a meeting held at the National School Feeding Secretariat between the management of the GSFP and the leaders of the association to resolve the impasse ended in a deadlock yesterday.

The caterers wanted the government to increase the current daily feeding grant from 97Gp to GH¢3 per child.

In addition, they demanded the payment of arrears owed them without any further delay.

According to the caterers, given the current economic situation of the country, which had led to escalating food prices, the 97Gp per child allocation was insufficient to provide quality food for the schoolchildren.

Some of the caterers who were at the National School Feeding Secretariat in Accra told the Daily Graphic that they were not happy with the delay in the payment of money owed them.

One of the caterers, who gave her name as Adwoa, said she was not going to cook until she was paid the money due her.

She said the prices of goods and service had gone up astronomically, while they were providing each plate of hot meal at 97Gp.

Another caterer, Veronica, said some of them had gone for loans to provide food for the children and their debtors were chasing them.

Rahel Yeboah said although she had provided meals for eight months, she was yet to be paid.

“The prices of goods and services have gone up by over 300 per cent within the past few months and we are still receiving the same amount,” she lamented.

However, one caterer, who would not mention her name, said she was still cooking, in spite of the fact that there were issues to be addressed regarding the payment of arrears and the cost of feeding.

“I am cooking and not on strike. I know there are issues, but I believe we can still be cooking as we wait for our issues to be addressed,” she said.

A visit to some basic schools in Accra indicated that the situation was a tough one for teachers and children.

In some of the schools, it was observed that for the past week since school resumed, some of the caterers had not been on duty.

Pupils had to bring food from their homes, while others bought food from vendors on the school premises.

A teacher who wasn’t happy with the situation mentioned how difficult it had been for some of the pupils to concentrate in class because of hunger.

Another teacher expressed worry about the health of the students, saying that some of the children came to school with GH¢1 or GH¢2, which was not enough to get them decent food.

The National President of the School Feeding Caterers Association, Charlotte Asante, expressed the hope that there would be some agreement soon, since there was going to be another meeting with the management of the GSFP.

“Our issue is simple: all we want is an increment in the feeding fee and the payment of money owed us before we start cooking. We, however, hope that we will hear something positive soon,” she said.

The Public Relations Officer (PRO) of the GSFP, Siiba Alfa, told the Daily Graphic that the secretariat was not aware of any caterers’ strike, and that what management was aware of was a demand for an increment in the feeding grant, which the caterers had put across at a press conference last week.

He said the outstanding arrears owed the caterers were for two terms — the third term of 2021 and the first term of 2022.

“Even before they held the press conference, we called them to dialogue to see how best we could address their concerns. This morning, we called the leadership to come here, and I must say that we were open and candid and told them all they should know.

“We told them of our efforts at the Controller and Accountant-General’s Department where we have been given an assurance to pay the money anytime from now,” he said.

The data for payment, he said, had been worked on and as soon as the Controller and Accountant-General released the money, the caterers would be paid.

He said the management of the GSFP had requested GH¢234 million, covering 68 days for about 11,000 caterers.

Mr Alfa said information available to the secretariat indicated that many of the caterers were cooking and appealed to the others to resume cooking, as steps were being taken to pay them their money.

“We urge the rest to go and cook while the leadership continues to talk to the GSFP management. The welfare of the children is at stake because they are the ones suffering,” he said.
Per the policy of the school feeding programme, he said, caterers who failed to cook for a certain number of days would suffer deductions from what was due them for the period they did not cook.

“All caterers who do not cook from today will not get their money. We are in the second term of 2022 and so when it is time for payment, we will deduct the number of days the caterers were not able to cook,” he said.