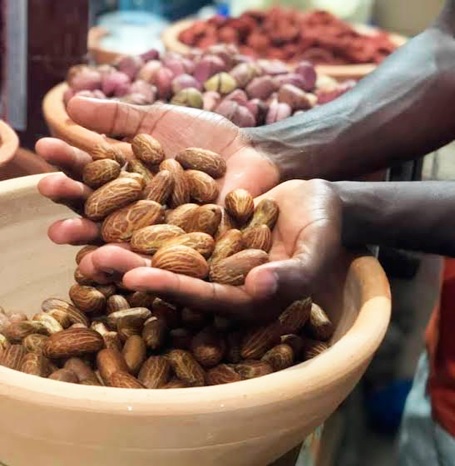 The desire to boost erections, lose weight and treat infertility has created a market for bitter kola nuts popularly known in Hausa as mijin goro.

In the past, one could only get bitter kola nuts to buy from the elderly women who sold the regular kola nuts on trays at vantage points.

They always had few mijin goro as compared to the red and white kola nuts which were on demand.

For those who went in for them in the past, mijin goro served as an antidote for common colds, dry coughs and congestion in the chest.

However, since the perception in recent times that bitter kola had some potency to increase sex drive, many young people are venturing into the business, giving it more visibility.

These days, it is common to find young men selling large quantities of mijin goro on wooden carts, wheelbarrows and baskets at the bus terminals, market centres, mosques, drinking bars and movie homes, among others.

Some people prefer to blend the nuts and add to alcoholic beverages, popularly known as ‘bitters’, to drink for vitality.

Increases sex drive
According to those who trade in it and those who use them, “bitter kola is capable of increasing sex drive and boosting sexual performance in men with low libido”.

It is believed that chewing at least two nuts of bitter kola a few minutes before sexual intercourse helps to boost sex drive.

Baba Yaro, a traditional herbalist told The Mirror in Accra on Thursday that just as it is believed that an apple a day kept the doctor away, when mijin goro is taken in a day, it could do wonders in the body.

According to the herbalist, the seeds of bitter kola, fruit, bark and nuts had been used for treating diseases and ailments from time immemorial.

Some blend the nuts and add to alcoholic beverages as bitters

“Bitter kola is used immensely for preparing several herbal drugs. Among the wonders of bitter kola; it is commonly used by some women experiencing infertility. Thus, as a woman, you can increase your chance of fertility by using bitter kola,” he said.

Dr Stanley Mensah, who is into plant medicine, posited that among the mythical amazing wonders that bitter kola performed was longevity, which led to its continuous consumption by elderly men to prolong their lives.

Also, scientists say it contains chemical properties that aid the breakdown of glycogen in the liver, with many other medical compounds that promoted longevity.

It can also be chewed raw or blended and mixed with other ingredients for treatment.

“It also has anti-microbial and antibacterial properties that have worked for people. Medical researchers agree that chewing at least one bitter kola every day can help in treating knee osteoarthritis, low libido, erectile dysfunction, low sperm count and arthritis. The bitter kola leaves can be prepared for treating stomachaches and pains. Those who know it use it and it works for their condition,” he said.

Weight loss
Dr Mensah said with the sudden craze for people to lose weight or burn the fat around their belly, bitter kola came in handy.

“We all know that overeating is one of the main causes of weight gain and this is where bitter kola comes in. It is a natural hunger suppressant. It prevents you from getting hungry so quickly and not feeling hungry all the time means you won’t overeat,” he indicated.

He explained that in this era of COVID-19, boosting the immune system was very important.

“If you are always sick, it is possible you are suffering from a weak immune system. Bitter kola for sure contains antioxidant that which helps to improve the immune system and protects you from any foreign disease or bacteria,” he said.

Metabolism
“Eating bitter kola increases your urge to drink water. One of the causes of belly fat is improperly digested food in your stomach that settles there and results in unwanted belly fat. By consuming bitter kola, your urge for drinking water increases and that is good for the body system.

"People with certain medical conditions might also be advised not to use products that contain kola nuts. For instance, kola nuts may not be good for people with high blood pressure or certain cardiac conditions due to their stimulant effect,” he stated.

In an interaction with some of the traders of bitter kola on wooden carts at the CMB Bus Terminal in Accra, they said business had been good in recent times.

For instance, the nut which was sold for 50 pesewas was now GH¢1 with three medium-sized ones going for GH¢5.

When asked some of the reasons why the nuts were in high demand they said, “the men mostly love to buy them to give them extra power for sex.”

He admitted that business was vibrant.

“Because of the coronavirus a lot of people like to buy mijin goro. When you also send them to the bus stops, the drivers love to chew them a lot. I also have both male and female customers at the Ministries around the Accra Sports Stadium area who buy a lot. Some of the women also say it is good for fertility and ease menstrual pains so they buy. Now I make more money with my brothers than the onion and scrap business,” he said.