Kids can show anxiety symptoms early on. Here's how to spot them 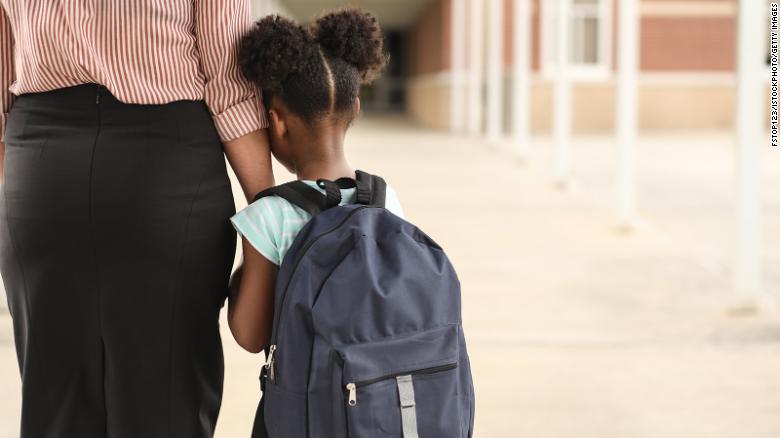 How do you know whether she's just having a bad day or if it's a sign of ongoing anxiety she might be experiencing?
Anxiety disorders are marked by persistent and excessive worries. While someone with generalized anxiety might worry about various everyday things, someone with social anxiety typically has "intense or persisting fears or worries about being judged negatively by other people," said Rachel Busman, a White Plains, New York-based clinical psychologist and cognitive and behavioral consultant who specializes in anxiety. "You're worried about saying or doing something that's going to make you look dumb or incompetent."

One-fifth of children worldwide have anxiety symptoms that are "clinically elevated," or worse than what's considered normal, according to a 2021 study. In the United States, 9.4% of children ages 3 to 17 -- about 5.8 million -- had diagnosed anxiety between 2016 and 2019, according to the US Centers for Disease Control and Prevention.


Anxiety symptoms can be difficult to spot, but the sooner parents notice signs, the earlier mental health professionals "can help parents and kids understand what's happening," said Dr. Rebecca Baum, a professor of general pediatrics and adolescent medicine at the University of North Carolina at Chapel Hill.
Children with anxiety might begin to avoid anxiety-inducing situations. This behavior can facilitate a cycle that makes their fears bigger and bigger, Baum added.
But "the earlier we have tools, the earlier we can set kids on a path that encourages them to be resilient and helps them face the things they're fearful of," Busman said.

Read on to learn about early physical, behavioral and emotional signs of general or social anxiety, and how to help your child.
General anxiety
Common signs of general anxiety in children -- according to the United Kingdom's National Health Service, Michigan State University, Baum and Busman -- include:

Difficulty concentrating
Trouble sleeping, bed-wetting or bad dreams
Not eating properly
Clinginess
Lack of confidence to try new things or inability to deal with simple, everyday problems
Avoidance of everyday activities, such as seeing friends or going out in public or to school
Inability to talk in some social situations
Reassurance seeking (repeated questions to reconfirm worries, such as exactly when and where you're going to pick them up from school, or if the weather's really going to be nice enough for a playdate)
Physical symptoms such as using the toilet often; tearfulness; headaches; dizziness; lightheadedness; sweatiness; stomachaches; nausea; cramps; vomiting; fidgeting; or body aches (especially if they usually occur before an educational or social obligation)

Tantrums, irritability or defiance could be misunderstood as disrespectful behavioral problems, but anxiety could be the underlying cause, Busman said. Refusal to do homework could be because they are anxious about making mistakes.
Children "don't necessarily have the tools to say, 'This is really causing me distress,'" Busman said. "So, they act out."
Social anxiety
Many symptoms of social anxiety are like those of general anxiety but come up in social settings, Busman said.
Children struggling with social anxiety might show these signs, according to Children's National Hospital in Washington, DC, the National Social Anxiety Center and the Mayo Clinic:

Avoiding or refusing to go to school
Refusing to speak in social settings or speaking in a soft or low tone
Poor social skills, such as fearing strangers or not making eye contact
Fearing or having difficulty with using public restrooms, speaking on the phone, giving public performances, eating in front of others, being called on in class, or being separated from parents
Physical symptoms including fast heartbeat, trembling, trouble catching their breath, feeling their mind has gone blank and muscle tension

Having conversations that count
Getting to the bottom of what's anxiety-inducing for your kid is important, but it must be done compassionately -- without grilling, which could make her feel defensive or put on the spot, and lead to her not wanting to talk with you at all.
Curious and nonleading questions are good, Busman recommended. Open prompts such as "I noticed you seemed hesitant going into that activity. What's up?" might work better than "Were you scared of going in, or did you not like those people?"

4 ways families can ease anxiety together

Ask your child how a certain event went, what she liked about it and what was hard.
Very young children might be unable to identify specific fears, such as saying something stupid or other kids seeing their anxiety, according to Anxiety Canada -- so some kids might verbalize those concerns in ways that make sense to them, such as "I didn't want people to look at my drawing" or "My voice really sounds funny," Busman said.
If your child's honest about what's making them anxious, avoid invalidating the experience by saying "That's nothing to be scared about" or "Don't be a baby." Also avoid affirming fears. Saying "That does sound so scary; I'm so sorry you had to do that" can make the child feel more fragile, Busman said.
A good balance is saying, "That does sound hard" and then a statement that acknowledges your child's capability to face the challenge and that you know you two can figure it out together, Busman added.
If your child's anxious about starting soccer practice and not kicking the ball, use some form of the above statement and reassure her that she'll improve with practice, but don't overdo it by saying she'll kick the winning goal -- which might not happen.
"We sometimes get nervous about somehow having our children experience less than perfect moments," Busman said, but teaching that imperfection is OK is crucial. Your child might miss the ball sometimes, and being liked by everyone isn't realistic.
Moodiness or more? How to tell if your kid&#39;s suffering from a mental disorder
Moodiness or more? How to tell if your kid's suffering from a mental disorder
"Navigating stress is an important part of childhood," Baum said. Parents and caregivers can model this by "talking about times when they've been anxious about something but tried to tackle it, even if it didn't turn out exactly how they had hoped."
If you're worried that talking to your child's teachers could cause stigma or a problem where there might not be one, know that consulting them is worthwhile since they observe your child for many hours in different environments daily and therefore "are often really good sources of information," Busman said. "Sometimes how kids are at home isn't how they are at school and vice versa."
A teacher can tell you how your child is interacting with peers and whether she's still sad or anxious after you drop her off at school.
When worries persist and "interfere with a child's ability to do the things they need to do to be kids," Busman said, "that's a good time to seek some more support."
The best treatment for anxiety disorders is cognitive behavioral therapy that involves some level of exposure therapy, which can help kids get comfortable doing the things they are scared of, Busman said.