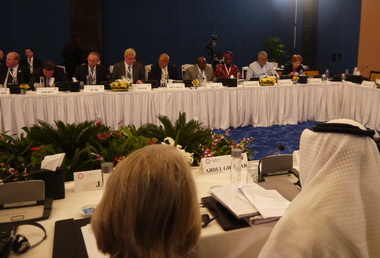 Ghana’s former President, Flt Lt Jerry John Rawlings has at a conference of former Heads of State in Bahrain called on Israel to restrain itself in its involvement in the conflict in Syria. President Rawlings also called on the rest of the international community to reinvigorate the option of political solution of the Syria conflict and condemn Israel’s recent air raids on Syria.

The former President was making an intervention during the 31st meeting of the Inter Action Council held in Manama, Bahrain from May 9 to 11.

The Inter Action Council is an independent organisation of former heads of state, which aims at fostering international cooperation and action in three priority areas of peace and security, world economic revitalisation and universal ethical standards.

The conference which was held under the auspices of First Deputy Prime Minister of Bahrain and Crown Prince, Salman bin Hamad bin Isa Al Khalifa brought together eighteen former heads of state from across the globe including three from Africa.

Former President Rawlings said he was disappointed that only China and Russia had reproached Israel over her unilateral actions in Syria and called on the United States to take a stronger view of the situation in the Middle East and seek equity for all parties.

“The dynamics are such that the time has come to reinvigorate a political solution and the United States should seize the high moral ground if she wants to be a global policeman especially in the Israeli – Palestinian issue.

“Today we live with the injustice in the Middle East as if it were the natural course of life. America needs help on the Israel - Palestinian issue. If we do not right the injustice the injustice perpetuates itself,” President Rawlings said.

The conference discussed among other issues, the Present State of the World, The Water Energy Nexus, Bridging the Religious Divide and Nuclear Non-Proliferation.

A communiqué issued at the end of the meeting called on states to adhere to international law as provided for in the United Nations Charter, UN resolutions, treaties and conventions and rules emanating from international courts.

The communiqué also expressed deep concern about the Israeli air strikes in Syria and called on all concerned sides to exercise maximum calm and restraint with a sense of responsibility to avoid an escalation of the conflict.

Russia and United States were encouraged in their efforts to convene an international conference aimed at ending the civil war in Syria while a call went to Iran to fully implement its Safeguards agreement and its other obligations and to engage with the IAEA to achieve concrete results on all outstanding issues.