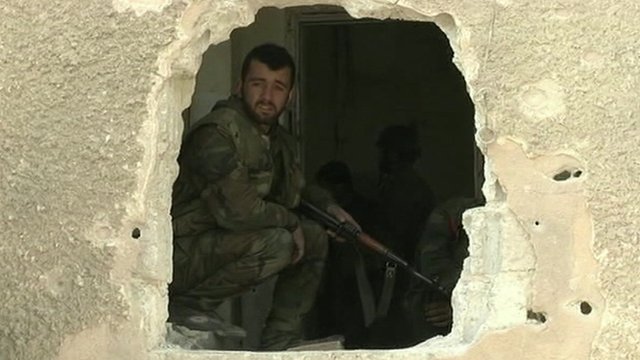 European Union foreign ministers are discussing British and French calls for an easing of sanctions against Syria so weapons can be supplied to the rebels. France and the UK argue that the move would increase pressure on Damascus for a political solution.

However, several EU states are totally opposed to ending the arms embargo, which expires on 31 May.

Fierce clashes are reported in a Syrian border town and more allegations have emerged of chemical weapons being used.

The meeting in Brussels came as the US, France and Russia pushed for Syria's opposition to join President Bashar al-Assad's government at an international peace conference in Geneva next month.

Syria's foreign minister confirmed on Sunday that the government would "in principle" attend the summit.

Members of the main opposition coalition are currently meeting in the Turkish city of Istanbul to decide whether to attend the conference.

They have been given an unofficial deadline of this evening, the BBC's Jim Muir reports, before US Secretary of State John Kerry is due to have talks in Paris with Russian Foreign Minister Sergei Lavrov.

Arriving for the EU talks in Brussels on Monday, several foreign ministers and EU foreign policy chief Catherine Ashton said it was vital to give the planned Geneva talks a chance.

Luxembourg Foreign Minister Jean Asselborn said first and foremost the EU had to "do everything to support as Europeans the American and Russian initiative".

Austria, in common with the Czech Republic, the Netherlands, Finland and Sweden. opposes arming the rebels. Austrian Foreign Minister Michael Spindelegger said the EU should remain as "a peace community by not being involved in such a conflict".

UK Foreign Secretary William Hague said that Britain fully backed the Geneva conference as "in the end there is only a political and diplomatically supported solution".

But he said amending the EU arms embargo was "part of supporting the diplomatic work". President Assad's government needed "a clear signal that it has to negotiate seriously", he said.

The US secretary of state has also backed an easing of restrictions on military support.

There are fears that anti-aircraft and anti-tank weapons given to rebel fighters considered "moderate" might end up in the hands of jihadist militants, including those from the al-Nusra Front, which has pledged allegiance to al-Qaeda.

But last week Mr Hague told British MPs that weapons would be supplied only "under carefully controlled circumstances" and with clear commitments from the opposition.

The EU embargo, first imposed in May 2011, applies to the rebels as much as the Syrian government.

But in February this year, foreign ministers agreed to enable any EU member state to provide non-lethal military equipment "for the protection of civilians" or for the opposition forces, "which the Union accepts as legitimate representatives of the Syrian people".

If foreign ministers fail to agree to an easing of the arms embargo, which expires at midnight on 31 May, a more likely deal would involve extending it without amendment for a short period to see if the Geneva conference is successful.

Unanimity is needed, and Mr Hague warned that if a deal could not be agreed, each member state would have to ensure it had its own sanctions.

Oxfam has warned of "devastating consequences" if the embargo ends.

"There are no easy answers when trying to stop the bloodshed in Syria, but sending more arms and ammunition clearly isn't one of them," the aid agency's head of arms control, Anna Macdonald, said in a statement on Thursday.

Fighting in Syria continued on Monday around the strategic town of Qusair, a few miles from the Lebanese border.

A prominent Syrian female TV journalist, Yara Abbas, was killed just outside the town, pro-government Ikhbariya TV said, in clashes that have threatened to spill over into Lebanon.

Dozens of militants from the Lebanese Shia Hezbollah movement have been killed in Qusair in the past week. The latest violence has prompted UN Human Rights Commissioner Navi Pillay to issue a dire warning.

"A humanitarian, political and social catastrophe is already upon us and what awaits us is truly a nightmare," she told the start of a session of the UN Human Rights Council in Geneva.

There has been increasing pressure on the international community to act since allegations emerged of chemical weapons being used in the conflict.

Syria has denied using chemical weapons, but French newspaper Le Monde on Monday reported that rebel forces in the Damascus suburb of Jobar had been targeted by canisters of toxic gas since last month.

A photographer working for the paper "suffered blurred vision and respiratory difficulties for four days", it said.

Earlier this month BBC News obtained unverified footage of civilians hit by an apparent chemical attack in the northern town of Saraqeb.

US President Barack Obama has warned that use of chemical weapons by Syria would be a "red line" for possible intervention.

However a UN commission of inquiry member, Carla Del Ponte, said this month that witnesses had also spoken of rebel use of the nerve agent, sarin.