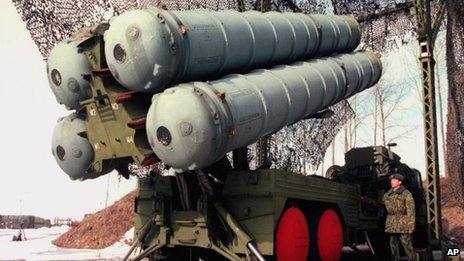 Syria has already received the first shipment of an advanced Russian air defence system, Syria's President Bashar al-Assad is reported to have said in a Lebanese TV interview. Russia vowed to go ahead with sending the weapons earlier this week in defiance of Western objections.

Mr Assad is also reported to have told Hezbollah-linked Al Manar TV that the tide of the war is turning.

Earlier, a rebel leader told the BBC that Hezbollah was "invading" Syria.

Gen Selim Idriss, the military chief of the main umbrella group of Syrian rebels, the Free Syrian Army, claimed that more than 7,000 fighters of the Lebanese Shia movement were taking part in attacks on the rebel-held town of Qusair.

Gen Idriss made an emotional appeal to Western powers on the BBC World Service's Newshour programme, saying: "We are dying. Please come and help us."

He appealed for more weapons "to defend our citizens".

Gen Salim Idriss makes an appeal on the BBC's World Service: "We are dying, we are suffering, many, many people are now waiting to be killed"

Gen Idriss said the FSA was fielding fewer than 1,500 fighters in the fight for Qusair, armed only with light weapons.

More than 50,000 residents were trapped in the town and a "massacre" would occur if it fell, he added.

The US State Department has demanded that Hezbollah withdraw its fighters from Syria immediately.

"Syria has received the first shipment of Russian anti-aircraft S-300 rockets," Al Manar quoted Mr Assad as saying in an interview due to be broadcast later on Thursday.

"The rest of the shipment will arrive soon."

The S-300 is a highly capable surface-to-air missile system that, as well as targeting aircraft, also has the capacity to engage ballistic missiles.

The delivery of such missiles raises fears of further tension with Israel as Mr Assad is also reported to have threatened to respond directly if Israel launches any further air attacks on Syria.

However, the Israeli Defence Minister, Moshe Yaalon, said on Tuesday he had information suggesting the missiles had not yet been delivered.

"The shipments have not left yet. Let's hope they won't, and if they do, we'll know how to act," he said.

Some analysts have characterised the possible use of the missiles as a "game-changer" in the Syrian conflict.

It is also feared that the missiles could endanger US-Russian efforts to convene a peace conference on Syria in Geneva in June.

In excerpts from his interview with Al Manar, Mr Assad is quoted as saying the military balance of power has gone in favour of the army which has scored major victories.

Syria and Hezbollah are on the same axis, he is reported as saying, with Hezbollah fighters deployed along the Lebanese-Syrian border.

Regime forces, backed by Hezbollah fighters, are reported to have retaken from rebels a disused military airfield north of Qusair.

This probably cuts the last supply line for the few rebels holding out in the town, says the BBC's Jim Muir in Beirut.

Opposition groups and humanitarian organisations say conditions for the civilians and the wounded in Qusair are dire.

Doctors are quoted as saying oxygen and other medical supplies have run out.

The opposition has appealed to the Red Cross and the Red Crescent to intervene to help 1,000 injured people at risk of dying for lack of medical attention.

Syrian government officials say that a corridor had been established to allow civilians to escape and fighters who put down their arms are free to leave too.

"We are under the impression that the National Coalition and its regional sponsors are doing everything so as not to allow the start of the political process and achieve military intervention in Syria through any means possible," he told reporters.

Mr Lavrov said National Coalition demands for Mr Assad to step down were "impossible to fulfil".

He called on the US and Europe to "rein in those who condone these absolutely unacceptable aggressive approaches of the National Coalition".