Teens kill just because they wanted someone dead 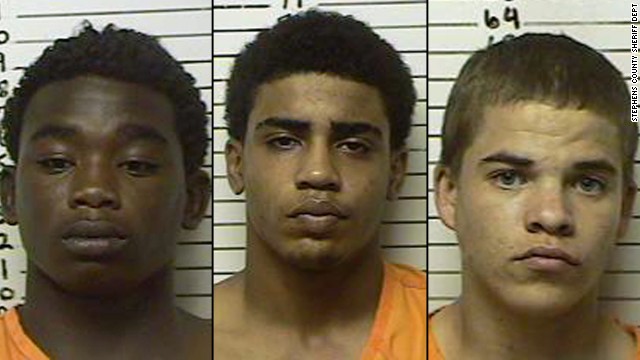 (CNN) -- A random act of violence has left a promising 23-year-old college baseball player dead, a family devastated and two countries half a world apart rattled.

Christopher Lane, who was from Australia, was gunned down in Duncan, Oklahoma, while he was out jogging last week. The motive? Three teens who had nothing better to do, according to police.

"They witnessed a young man run by on the street. Chose him as the target," Police Chief Danny Ford told CNN affiliate KSWO.

Charges were filed Tuesday against the three teens.

James Edwards Jr., 15, and Chancey Luna, 16, were charged as adults with felony murder in the first degree, according to Kaylee Chandler, Stephens County Court Clerk.

Michael Jones, 17, faces two charges -- use of a vehicle in the discharge of a weapon and accessory after the fact to murder in the first degree, she said.

A judge set bond at $1 million for Jones, while no bond was set for Edwards and Luna, Chandler said.

When police arrested the teens, one of them offered up a motive that made clear that Lane, who attended East Central University on a baseball scholarship, was chosen at random.

"He said the motive was, 'We were going to kill somebody,'" Ford told Australian radio station 3AW.

"They decided all three of them were going to kill somebody."

Police say the teens shot Lane in the back in the town of about 24,000 and sped away in their car.

"There were some people that saw him stagger across the road, go to a kneeling position and collapse on the side of the road," Ford told KSWO.

Police caught the teens a few hours after the shooting. Thanks to security cameras from local businesses, police saw their car speeding down the street.

Lane was remembered as magnetic -- the sort of person who could always lighten the mood.

"Chris was a charming guy, genuinely good person, with great character and had a love for life. As cliché as it sounds Chris was the kind of guy you want your sons to grow up to be and that you want your daughters to marry. It just breaks my heart knowing how much more he could have brought to this world as a husband, father, son, brother and friend," said Sam Malchar, a former ECU teammate and classmate.

Half a world away

Nearly 10,000 miles away in Australia, Lane's family struggled to cope with the news.

"He's left his mark as we know, and you know there's not going to be any good come out of this, because it was just so senseless," Christopher's father, Peter Lane, said. "It's happened. It's wrong, and we're just trying and deal with it the best we can."

Lane's girlfriend, Sarah Harper, posted an emotional tribute on Facebook, saying "you will always be mine and in a very special and protected place in my heart."

"Such a sad waste of a young man's life," one poster wrote.

"Know that many Americans are sorry for this tragedy and want justice for Chris," wrote another. "God bless."