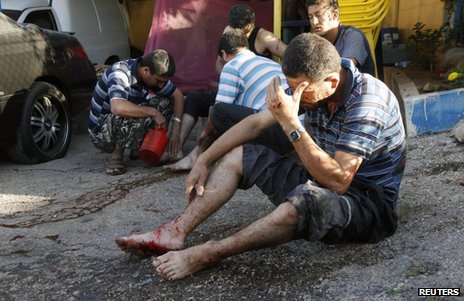 At least three people have been injured by a rocket strike on the southern part of the Lebanese capital Beirut. Two rockets hit a district controlled by the Hezbollah organisation, officials and residents were quoted as saying by news agencies.

Tension has been high over the conflict in neighbouring Syria.

On Saturday, Hezbollah leader Hassan Nasrallah promised his supporters they would prevail in Syria, where they are backing President Bashar al-Assad.

There was no immediate indication who had fired the rockets or from where.

Dozens of Hezbollah militants are said to have been killed in recent fighting alongside Syrian troops.

Mr Assad is fighting to end a revolt against his rule which began just over two years ago and has left at least 80,000 people dead and made refugees of some 1.5 million.

A Reuters news agency photo from Beirut showed dazed men with cuts to their legs being treated in the street by friends.

Another photo showed the face of a residential building pockmarked by what appeared to be shrapnel.