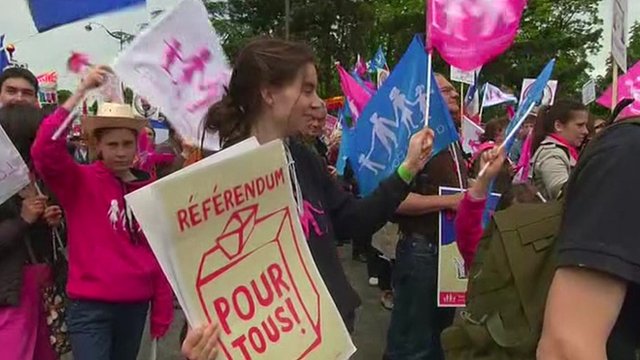 Tens of thousands of protesters against France's new same-sex marriage are marching in the capital Paris, amid a heavy police presence. They are rallying against the law signed recently by President Francois Hollande signed, after heated debates.

Officials have warned that hardliners might infiltrate the rally, but there are no reports of violence so far.

France is now the ninth country in Europe, and 14th globally, to legalise gay marriage.

But French people have been bitterly divided over the issue. On Tuesday, a far-right historian shot himself dead in Notre Dame Cathedral, leaving messages in which he denounced gay marriage.

French police said that about 150,000 protesters took part in the march in central Paris, and the number was expected to grow.

One demonstrator dressed in black, holding a scythe and wearing a mask of Mr Hollande, stood behind a coffin in which lay a mannequin dressed as Marianne - the emblem of France.

Some marchers drove donkeys, one of which bore a placard which read, "I am an ass. I voted Hollande".

The demonstrators headed in columns from three points around the city to the Invalides complex.

The leader of the UMP conservative opposition party, Jean-Francois Cope, headed one of the processions.

Some 4,500 have been deployed to prevent any violence.

It is the first big rally since the law was signed on 18 May by Mr Hollande.

One UMP member of parliament, Jacques Myard, told BBC News that the law had been passed by the governing party "by force" and his party would review it if re-elected.

Mr Myard told the BBC there was a "huge gap between this government and the citizens" over the marriage issue.

"This is something we cannot accept because of the fate of the children," he said.

"Those people are playing God, because they want to marry, but it won't stop at this stage. Then they will adopt, and then we will have children in families where there is no father or no mother."

The leader of France's far-right National Front, Marine Le Pen, was also among the marchers.

Among those expected to take part were members of a radical new movement called French Spring (French: Printemps Francais), which the interior ministry has threatened to dissolve due to its inflammatory rhetoric.

On Saturday evening, a group of protesters chained themselves to metal barriers they had placed in the middle of the Champs-Elysees.

Some released smoke bombs before police moved in and arrested them. Nobody was hurt.

Opposition to gay marriage has become conflated with all sorts of other anti-government grievances coming from the right and the atmosphere in the country is particularly volatile, the BBC's Hugh Schofield says.