Indian Prime Minister Narendra Modi has announced $600m (£393m) in assistance for development projects in Africa at a major summit in Delhi.

More than 50 African leaders are attending the India-Africa Forum Summit, unprecedented in scale, in the Indian capital.

Although India's trade with Africa has more than doubled to $72bn since 2007, it is still comparatively small.

The meeting is being seen as an attempt by India to improve ties with Africa. 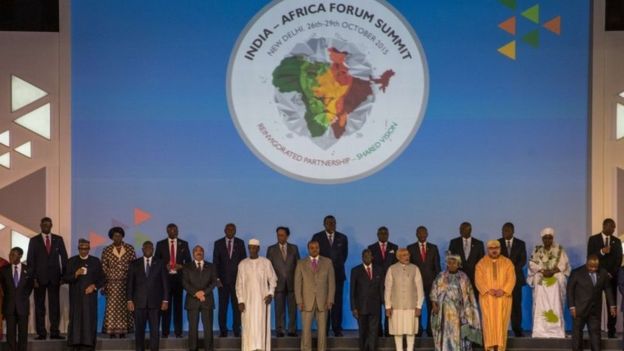 'Bright spots'
Reports say the summit represents the highest number of foreign dignitaries to descend on India since 1983 and is thought to be the biggest ever overseas gathering of African leaders.

Welcoming them, Mr Modi described India and Africa as the "two bright spots of hope in the global economy".

"The hearts of 1.25 billion Indians and 1.25 billion Africans are in rhythm. We are united by youth - two thirds of India and Africa are below 35. And, if the future belongs to the youth, then this century is ours to shape and build," Mr Modi said.

The BBC's Sanjoy Majumder in Delhi says India is using its historic ties with the continent, where a large number of Indians migrated during colonial times, to strengthen its economic links.

India is interested in Africa's natural resource while African countries want to benefit from Indian expertise in high-tech sectors such as IT and mobile phones.

Much of central Delhi has been shut down as the African leaders are being ferried across town in limousines and on Wednesday night, they turned out wearing colourful Indian turbans and jackets at an official dinner.

The first ladies, in the meantime, are being taken sightseeing and given Indian cooking lessons as India pulls out the stops to make the summit a grand success, our correspondent says.