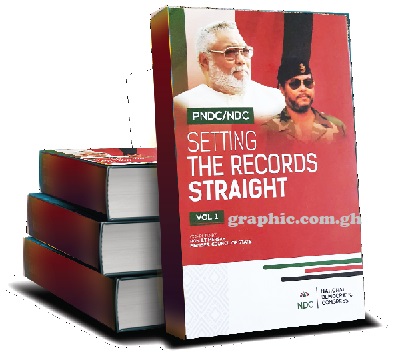 Hon E. T. Mensah’s book, “Setting the Record Straight”, has an honest title and book cover. The cover has two pictures of former President Jerry John Rawlings – one as a young man and the other represents the latter model, complete with white beard.

The two photos are meant to represent the PNDC and NDC under Jerry Rawlings in two different periods; the cover also has the words NATIONAL DEMOCRATIC CONGRESS in capitals and its abbreviation, NDC, is also there with the umbrella logo for good measure.

In case anyone fails to decipher the optics, the book is meant to defend the record of the Rawlings years as the Chairman of the PNDC and the first President of the Fourth Republic. Indeed, the contents line-up reinforces that idea.

The author does not explain why he has chosen to mount this defence or set the records straight, as he puts it, at this time but I believe that he is eminently qualified to do so.

The author's biographical notes on the blurb is a brief one, noting that he has worked in various capacities as a “public servant and finest politician which have over the years endeared him to the hearts of many Ghanaians, both within and outside”.

It notes further that he started work as a college tutor and headmaster, auditor, senior accounts clerk and accountant.

However, that does not even begin to tell the story. Perhaps, only a few people can tell the inside story of the PNDC/NDC better than Honourable E. T. Mensah.

During the time of the PNDC he was the longtime Chief Executive of the Accra Metropolitan Assembly (AMA), i.e. Mayor of the City of Accra. He was a founding member of the National Democratic Congress and stood for Parliament and was elected in the 1996 elections, holding the seat for two decades. He served as the Minority Chief Whip in Parliament prior to the parliamentary election in 2008 and became the Majority Chief Whip in Parliament.

At the beginning of the Fourth Republic, E. T. Mensah was appointed Minister for Youth and Sports by President Jerry Rawlings. He held that position through both terms of the Rawlings government. In January 2010, after a cabinet reshuffle, President John Atta Mills appointed him Minister for Employment and Social Welfare.

Our author was a member of the Pan-African Parliament until January 2009, when he resigned after being appointed a minister of state. In January 2011, he was appointed Minister for Education following the resignation of Betty Mould-Iddrisu. He is currently a Member of the Council of State.

This is just a short resume of a career that shows him to be at the forefront of Ghanaian politics and an insider of NDC politics. And I point out all this to make the obvious point that E.T. Mensah is entitled to feel qualified to set the records straight, and indeed to quote from the author’s own preface: "from my role as the Mayor of Accra through my ministerial appointments at various cabinet positions and a member of Parliament, I have gathered enough information to be in a position to compile the records of achievement of the Rawlings regime."

As the author himself says, “the intention of this compilation is to set the records from 1982 to 2000 when Jerry John Rawlings handed over power to the New Patriotic Party (NPP) led by John Agyekum Kufuor. With that the stage is set for the deployment of what the author believes to be the facts and figures to set the records straight.

The fifteen chapters of the book are subdivided into several sections covering all the major government departments, state corporations and parastatal organisations, their projects and initiatives.

In every sector, the author provides what the government did under Jerry Rawlings to make this a better country. I will leave it to the reader to go through the facts and figures as claimed by the author because even to select a few examples here will be burdensome for this occasion.

To make sense of the very foundation of the book’s thought process, let us go the very beginning of the book’s prologue titled Rawlings and the Engineering of Legitimacy in Ghana.

The short summary of the idea is that by 1981 the state of Ghana - the author quotes Naomi Chazan, who wrote in 1983 - “not only had the government lost what little control it held over the population, but it had to contend with the veritable shadow government that took shape to fill the void left by regime inaction”.

Neither the original source of the quote nor Hon E. T. Mensah explains who formed the shadow government and how it operated.

In reference to the December 31 coup, the author goes on to argue that it was an attempt to achieve public validation presumably for the Jerry Rawlings rule, at least at the initial phase.

The book helpfully recounts the early years of the PNDC and the institutions it spawned in its bid to stabilise the economy and the nation.

Equally useful is the recall of Ghana’s history in a summary form that will aid readers to appreciate the situation of Ghana up to the coup of December 31.

Of course, the December 31 coup continues to divide opinion in Ghana even today with its adherents and supporters believing that it saved the country from ruin, while its opponents argue that it was a needless truncation of a nascent democracy.

Of course, the author is in the first category and I believe that it is in support of the coup and its aftermath that this record has been compiled.

The burden of the author’s argument is that Rawlings and the revolution saved the nation and his case begins to take shape with his analysis of the Economic Recovery Programme (ERP) and all its variations and consequences.

The author methodically recounts the phases of the ERP and its implementation through various sectors of the economy. While acknowledging that the cut back in government expenditure in some sections caused hardship to “many elements in Ghanaian society”, the author concludes that the money was used to improve services in health, education and other social services.

Setting the Records Straight takes us chapter and verse through all programmes and initiatives of the Rawlings era, and from the author’s perspectives, these established the foundations for modern Ghana as we know it with reforms in every area of endeavour.

This is a well-researched book and should be taken seriously. It is particularly useful for the younger generation who need to know how we got to where we are.