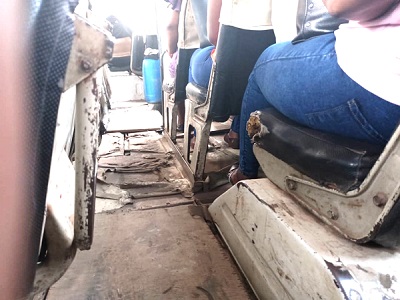 This vehicle is so rickety that some passengers got drenched when it rained. Follow @Graphicgh

“Don't mind the body; mind the engine,” Numo Okine, the driver of a 23-seater bus, retorted, as he took a dig at a female passenger. She had complained about how ramshackle the vehicle was.

Before Numo could say Jack, a dozen of passengers descended on him like a swarm of bees.

As the trading of invectives went on, another occupant of the bus drew the passengers’ attention to an inscription on the front screen of the car - "Let them say." They all burst into laughter. And that settled matters.

As I reflected on that morning’s episode, I noticed that the seats in the bus were worn out, exposing metallic parts. The driver’s seat was so loose and unstable that it had to be supported with wires. Portions of the car’s roof had worn off, exposing passengers to some direct sun rays. 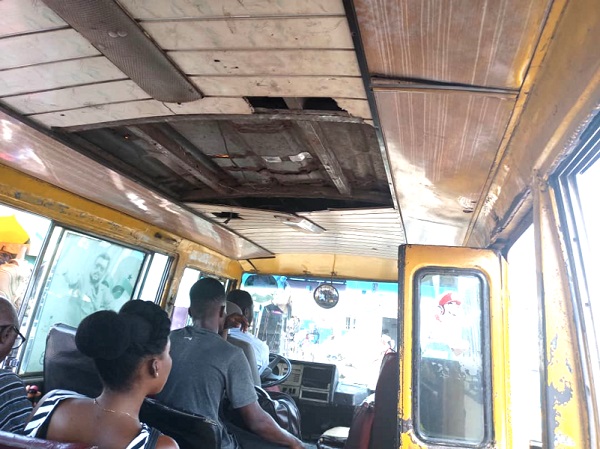 When the driver eventually started the car’s engine to take off, the thick, dark smoke emitted from the engine, making everybody to reach for their handkerchief to cover their noses.

I contemplated disembarking from the car to find a different vehicle; but I realised that I had to tell the story about how rickety vehicles preyed on travellers.

I found this a worthwhile endeavour because the predominant mode of transport in the country is road transport.

The National Transport Policy (2020) estimates that road transport has a market share of over 95 per cent and 90 per cent passenger and cargo traffic, respectively.

Commercial vehicles, popularly called "trotro", are the main mode of road transport, accounting for about 60 per cent of passenger movement, while taxis take 14.5 per cent, with private vehicles catering for the remaining passenger traffic. 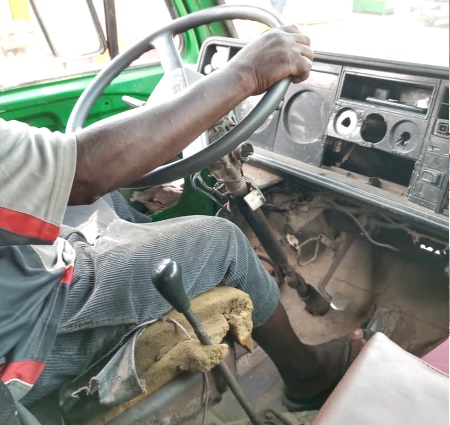 Unfortunately, some of these “trotros” are rickety vehicles, with poor and dangerous exteriors, sub-standard tyres, and seats without seatbelts, exposed electrical wires and sharp edges that pose a danger to passengers.

According to the Driver and Vehicle Licensing Authority (DVLA), 3,026,073 vehicles have been registered in Ghana as of December, 2021, but 35 per cent of them, translating into 1,025,125 vehicles, failed to obtain roadworthy certification as required by law.

The Deputy Director of the Vehicle Testing Department of DVLA, Eric Bentil Addison, explained that many of the more than one million vehicles without roadworthy certificates are rickety and not fit to be on the roads.

Interestingly, interaction with 10 drivers of rickety vehicles at lorry terminals at Tema Station, Kwame Nkrumah Circle, Kaneshie and Agbogbloshie on separate occasions revealed that they used the backdoor to get roadworthy certificates, some of which were fake.

"There are people who do it for us. We give the details of our vehicles to them and they go to DVLA and do it for us," a driver, who gave his name as Dada Raph, said.

Another driver, Felix Okoh, who shuttles between Kwame Nkrumah Circle and Odorkor, in Accra, said he had a contact person at the DVLA, who did his vehicle testing for him.

Although Mr Addison indicated that the DVLA was deploying modern technology to address the challenge of fake licence, it appeared that the horse would have bolted before the stable door was shut.

Apart from being accident-prone, these rickety vehicles add to the many trucks that breakdown on the highways and contribute to road crashes.

The situation is even more worrying because while L.I 2180 gives specific directives on the movement of breakdown vehicles, there is no compliance. 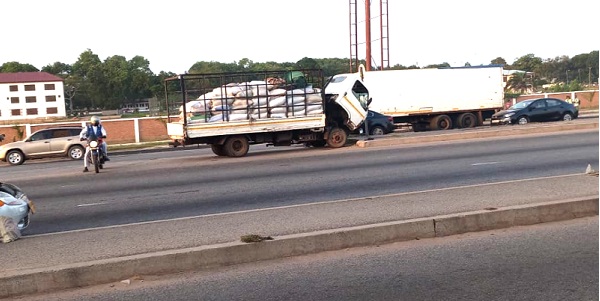 Despite the existence of this law, some breakdown vehicles are left on the road for many days and, sometimes, months without being cleared.

While concerns about the influx of rickety vehicles on the roads continue to soar by the day, drivers overload such vehicles with cargo. They tuck goods under the seats of vehicles such that the passengers can barely find space for their feet when seated in them. They also overload the carrier at the top of vehicles with tonnes of cargo.

Experts say that when a vehicle is overloaded, a lot of strain is put on it; the vehicle, therefore, becomes unstable; acceleration is affected; brakes may fail; tyres wear and tear; the combined effects of these factors increase the risk of road crashes.

With road transport constituting over 90 per cent of the country’s transport sector, one would have expected that the road infrastructure would be good enough for easy movement.

The World Health Organisation (WHO) estimates that 1.3 million people die each year through road traffic crashes.

A comprehensive analysis of road traffic statistics from the National Road Safety Authority (NRSA) revealed that between 1991 and 2021, a total of 53,507 persons died from 336,335 reported road crashes in the country.

The statistics further showed that 430,333 people suffered varying degrees of injury, with many of them becoming permanently disabled.

With just eight years to achieving United Nations' (UN)’S Sustainable Goal (SDG) 3.6 – half the number of global deaths and injuries are from road traffic accidents, it is, therefore, important for the DVLA, NRSA and the Motor Traffic and Transport Department (MTTD) of the Ghana Police Service to strengthen collaboration for effective policy implementation and enforcement of the traffic regulations.

Such collaboration will also help to deal with the use of unorthodox means of acquiring roadworthy certification.