Homosexuality? Not in Ghana! 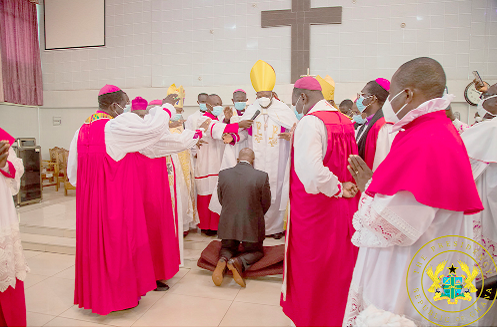 • Nana Akufo-Addo being prayed for by the Anglican church at Asante Mampong. He has promised that same sex relationships will not be legalised under his watch
30.5k Shares

What is LGBTQI?  That acronym stands for Lesbianism, Gay, Bisexuals Transgender, Queer, Intersex, a hitherto Western practice not known to any part of Africa.

In Africa, we are so opinionated that we believe that whatever comes from America, Europe and Canada are the best.

Unfortunately, that can never be the situation at all times.  It is time we set our own moral standards to guide our standard of living.

Whitemen frown on our polygamous marital relationships and we have been led to believe that their rather abhorrent practice of homosexuality and lesbianism with their associated variants are more preferable.

Gayism in all its forms is an aberration of nature.  Nature in its infinite wisdom could never have erred in designing this wonderful world we find ourselves in.

Even in plants, there are male and female species.  Even lower animals never practise the abhorrent practice of gayism.

African countries should not make poverty lead them to lose their sense of dignity and social identity.   The Western world is now resorting to gay-lesbian imperialism by threatening to withhold grants and aids to countries in Africa who try to resist this LGBTQI.

A country resisting it is accused of human rights abuse. How on earth can one describe gay practice as human rights?

The most nauseating part of this practice in decadent societies is that they allow gay partners to adopt children!

If gayism is to become a universally accepted norm how could procreation go on for people of such skewed mentality to get children to adopt?  And the question I always ask myself is what moral lessons do these gay couples teach these gay adopted children, knowing very well that a child’s first role models are his parents.

In so far as life in all its forms is not premised on gayism but on procreation, prohibitive measures by countries against the practice of gayism cannot be described as human rights deprivation.

Even countries which practise such things are aware of the revulsion society has against it that is why most people seeking election to public office conceal it if they indulge in that.

Those who are bold to come out have the descriptive prefix, openly, before the gay.  Hence such people are described as openly gay politicians.

No matter the quality of such people once they are so described they have a tall mountain to climb before they reach their goal.

During the 2020 primaries in America, the Democrats had a candidate, Peter Paul Mongomery Buttigieg, carved in the mould of President Obama, so sharp and so articulate that I always called him white Obama, but was described as openly gay.

A question put to him by a journalist summed up the mindset of the American public towards gay people aspiring for the high office of the presidency.

The journalist asked him how he hoped to raise a family at the white house.  This time his articulation eluded him and he answered quite sheepishly, “I will raise a family at the White House with my partner”.  A male partner of course.  In fact, he had everything that could have made him the most preferred choice, age, and all, he was just 42 but he lost to the septuagenarian Joe Biden, and is not surprised he lost.

If gayism is such a good practice that the West wants to foist on Africans, why do most of them conceal such a practice.

Please, Africans should desist from the practice of allowing the West to set standards for us all the time.  It is time we set our own moral standards.