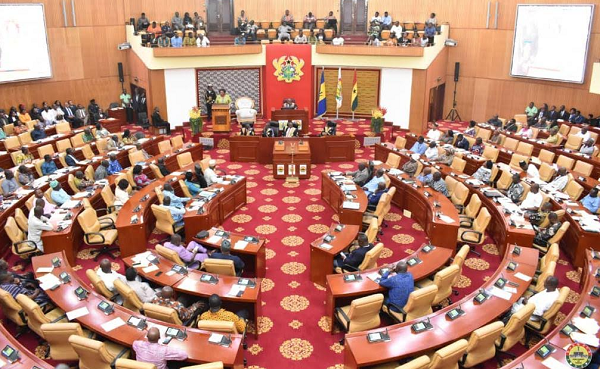 It is no longer funny what is happening in our house of legislature. It is even more worrying that the situation in Parliament is gradually shifting from the lack of agreement to forming a quorum for the business of the day.

So far, the Eighth Parliament has been saddled with so many issues that seem wobbly, thereby taking one giant step forward and many steps backwards to the detriment of our budding democracy.

As citizens, we cannot look unconcerned or cower under kitchen stools while the individuals in whom we have entrusted our collective power and representation do not see eye to eye, leaving the rest of us in panic and disbelief.

This new trend of quorum or the lack of it in Parliament is beginning to frustrate many of us already and the Members of the House must know this, bearing in mind that the beauty of our democracy is not the ugly politics but rather our ability to make progress in our diversity.

Article 104 (1) of the 1992 Constitution states that: "Except as otherwise provided in this Constitution, matters in Parliament shall be determined by the votes of the majority of members present and voting with at least half of all the Members of Parliament present ".

This means that the attendance of MPs is equally important as the decisions they make. That is why the lack of quorum in the House recently, the disruption of proceedings and the keeping of important decisions that should be made in the interest of the public, frustrate all of us and can ultimately undermine development.

Our dear MPs must understand and ensure that the business of the House is their foremost preoccupation because they represent the interest of the public and are paid from the public purse.

For this reason, we expect nothing short from them than to represent us fully in the House.

One may understand that for one reason or another, an MP may be unable to be present in Parliament, but in such rare situations I sincerely believe there should be clarity on what steps must be taken by the individual MP.

If urgent steps are not taken by the Members of Parliament, and the current trend of the house not forming a quorum and the level of mistrust among members, which affects the business of the legislature fester, our democratic dispensation will suffer a huge blow.

It is so essential to have a strong legislature which is committed and ready to hold the government to account. But it is equally important for this strong Parliament to understand its place in our democracy.

At this point, what I expect, and I believe many of our compatriots do too, is for the leadership of Parliament, including the Speaker and the leaders of the Majority and Minority groups to rise up to be counted in this uncertain moments of our legislative endeavours.

They must always endeavour to engage in deeper consultations to bring sanity and progress to the work they do in the House, especially, how they conduct daily businesses.

I am of the conviction that a strong Parliament, working together for the public good and the interest of the nation, will not only see loans and grants approved in a timely manner but will also ensure that critical decisions are made.

I recall the days of Speakers Rt Hon Justice Daniel Francis Annan, Rt Hon Peter Ala Adjetey, Rt Hon Justice Joyce Adeline Bamford-Addo and Rt Hon Edward Doe Adjaho where our Parliament looked robust and despite their differences were able to make good progress in the business of the legislature.

There are many issues confronting this country, requiring our MPs to sit together to make important decisions to support the national resilience.

We are burdened with fuel hikes, rising inflation, the Cedi struggling against the dollar and the major currencies, and a rise in the general cost of living which is of much concern to everybody.

The reality is that the harsh economic conditions seem to be throwing economic plans out of gear and already some respected individuals are begging to voice out some solutions.

The World Bank Country Director, Mr Pierre Laporte; Professor Kwesi Botchway and Professor Stephen Adei, have all made some suggestions including a national debate. Some have also called for borrowing from the domestic market and seeking IMF support to find a way forward.

These suggestions may differ in terms of policy direction but it should not be lost on our leaders to take a cue from them, especially of MPs, to sit up and get this nation moving in the right direction.

In the news lately, Frank Annor-Dompreh, the  Majority Chief Whip, is reported to have dished out accusations at the Dome-Kwabenya MP, Adwoa Safo, for sabotaging government business by failing to show up in Parliament.

I was not only disappointed but I was alarmed that there is some dysfunction up there among the Majority group and Parliament as a whole.

Was this situation even necessary to be brought to the media for it to be discussed in the first place? Is our Parliament now resorting to the media to settle its misunderstandings? The MP for Assin Central, Kennedy Agyapong and the MP for New Juaben South, Michael Okyere Baafi, have also on previous occasions hit had at Ms Safo for her continuous absence in Parliament.
It is not healthy. It rather delays progress.

However, in situations where an MP decides to abandon parliamentary duties and cannot be accounted for by the leadership of the House, we cannot remain silent but to act and act decisively.

One cannot easily process the reason that can spark such unpatriotic behaviour.

How can an MP, the people’s representative, be seen to be sabotaging the work of Parliament and for that matter government business. This is not right and the earlier it is addressed the better, if there are any such signs.

We must avoid a situation where our parliamentarians resort to just boos and rancour in their deliberations in the House.

If they resort to insults then something is amiss and we would need deep thinkers to guide the affairs of the legislature and political discourse because we cannot tolerate the sudden distortion in our general political culture.

For the MPs who may not be happy about the unfolding situation in the House, they must be bold enough to stand up to be counted too and provide guidance to their colleagues.

They must not look on while truth and integrity is sacrificed because when all goes well with our Parliament, the country will find its feet and be stronger.