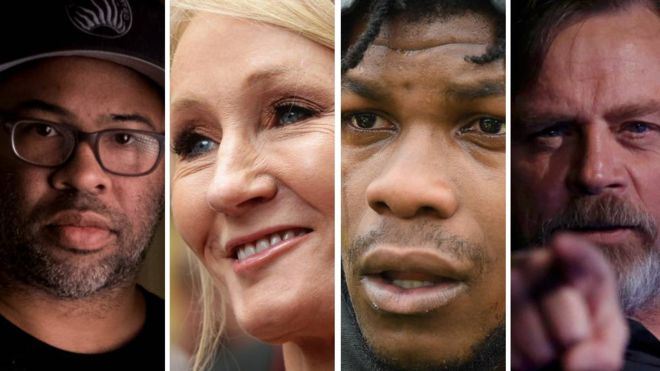 Stars including JK Rowling and Jordan Peele have praised John Boyega for his emotional speech at a Black Lives Matter protest in London on Wednesday.

He paid tribute to African-American George Floyd, who died in police custody on 25 May - but said his comments could damage his career.

Instead, Hollywood offered its support.

"We got you, John," said Peele, the Oscar-winning director of Get Out.

"Happy to work with you any time, John," said Harry Potter author JK Rowling, whose third Fantastic Beasts film is currently in pre-production. She tweeted applause emojis in response to his speech. 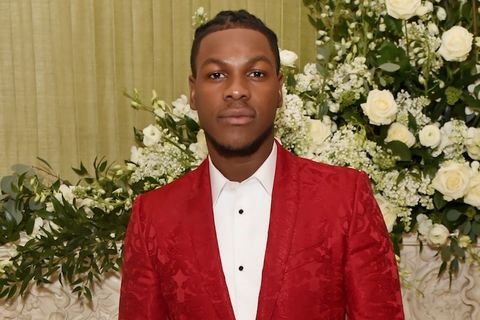 Boyega, who was born in London to parents of Nigerian descent, observed: "I don't know if I'm going to have a career after this."

Filmmaker Matthew A Cherry, who won an Oscar this year for animated short film Hair Love - about an African-American father styling his daughter's hair for the first time, added his support.

I would work with John Boyega and I urge other Non-Black creators to affirm that they have his back as well. https://t.co/SqXgmIS5aR

A tearful Boyega, who starred as Finn in the latest Star Wars trilogy, made his comments while addressing demonstrators in London's Hyde Park.

"I'm speaking to you from my heart," said the 28-year-old through a megaphone.

"Today is about innocent people who were halfway through their process," he continued.

Booksmart actress and filmmaker Olivia Wilde was among the first to reply to Boyega's speech, saying: "Absolutely. I would be honoured to work with John Boyega and can only hope to have the chance. We've got your back, John. Don't hold back."

You are our hero'

The official Star Wars account added that the series and its producers Lucasfilm "stands with John Boyega and his message that now is the time. Black lives have always mattered".

"The evil that is racism must stop. We will commit to being part of the change that is long overdue in the world. John Boyega, you are our hero."

Mr Floyd died in Minneapolis last week after a police officer knelt on his neck for almost nine minutes. Derek Chauvin has been charged with second-degree murder, while three other officers face charges of aiding and abetting murder.

The death has caused protests and sporadic rioting in America, along with global mass demonstrations.

'Right side of history'

The London protestors later moved from Hyde Park to Parliament Square and Downing Street to make their voices heard.

Writer and producer Jack Thorne, whose credits include the stage play Harry Potter and the Cursed Child, also voiced his support.

"I have worked with John Boyega and would cut my hand off to work with him again," he said, describing Boyega as "a magnificent talent".

Actress Yvette Nicole Brown, who starred in US TV series Community and also had a cameo role in Avengers: Endgame, said: "Dear John Boyega, I see you and I love you. Thank you for loving us."

"And know this, being on the right side of history is better than any paycheck complicit silence would provide," she added.