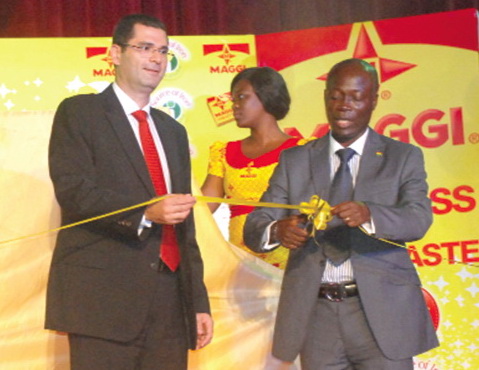 The Deputy Minister of Trade and Industry, Nii Lante Vanderpuije (right), being assisted by the Country Director of Nestle Ghana Limited, Mr El Moataz El Hout, to cut the tape to signify the relaunch of the new Maggi, an iron fortification product at a ceremony in Accra. According to Mr El Hout, maggi tablets are made with cassava starch and other foodstuffs such as vegetables, meat and fish.

He said even though the new maggi cube is rich in both iodine and iron, it should not be seen as medicine.

The Maggi Iron Fortified, which is now wrapped would rather help reduce iron deficiency in Ghana.

A representative from the Nutrition and Food Science Department of the University of Ghana, Dr Gloria Otoo, gave a short lecture on the importance of iron in diets.

She said that over two billion people world-wide suffer from iron deficiency and has caused 0.8 million deaths world-wide.

According to Dr Otoo, those mostly affected are infants, children under five years, children of school going age and women of child-bearing age between 15 and 49 years.

Dr. Gloria also said food should not be taken alongside tea, coffee and red wine but an hour after meals.

This is because a single cup of any of these beverages reduces the amount of iron by 11 percent.