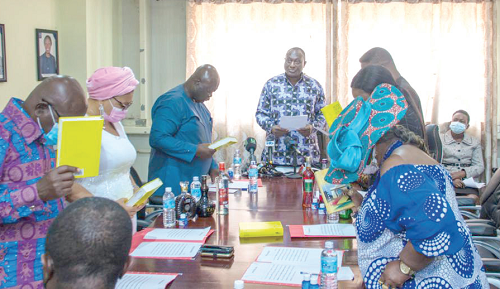 The Minister of Trade and Industries, Mr Alan Kyerematen, has urged the newly inaugurated board of the GIHOC Distilleries Company Limited (GDCL) to intensify the export drive of the company.

He said with the establishment of the African Continental Free Trade Area (AfCFTA), GDCL could become the leading beverage brand on the continent giving the superior quality of its products.

"I have a strong feeling that AfCFTA can become the game changer for GIHOC Distilleries. Because with the quality of the products and the brand appeal of your products, I have no doubts that very soon you will have GIHOC products not only in West Africa, which has been the trend, but all over the continent," he said.

Mr Kyeremanten stated the above in Accra last Thursday when he led the new board members to take the official oath and the oath of secrecy to officially usher them into office.

Ms Esther Obetsebe Lamptey is the only addition to the new board.

Pleased with the transformation of the company, the minister lauded the board, the management team and the staff of the company for their "excellent work since the assumption of office in 2017".

"And for a distressed company to have emerged to become one of the leading companies in the beverage industry in this country means that the old board and the management deserve commendation," he added.

The minister, who also toured the production plants of the company after the inaugural ceremony, said with the "great innovation and diversity", he was sure to see new brands of GDCL on the market soon.

Addressing the challenges of the company, Mr Kyerematen reiterated the commitment of the ministry and the government to support the growth of GDCL.

He said the distilleries would benefit from a government policy directing that procurements involving public funds must be done from companies with the capacity to produce.

"You have an advocate and a friend in me. I can assure you that going forward there are brighter days ahead of us. You can count on my support and the support of the President," he stated.

In spite of its "daunting" challenges, Sqn Ldr Bartels said the company had made some significant gains over the years.

He made reference to the rebranding of some products to make them appealing to the public and the acquisition of a new water bottling plant at Akyease, Kumasi.

"We are in the process of acquiring another bottling plant at Dodowa. The alcohol industry goes with bottles and to do that, we thought we should make efforts to acquire the almost defunct Aboso Glass Factory," he added.

The board chair further gave an assurance that "we shall do the bidding of the President and go by the dictates of the oath we've taken to keep GIHOC Distilleries afloat."