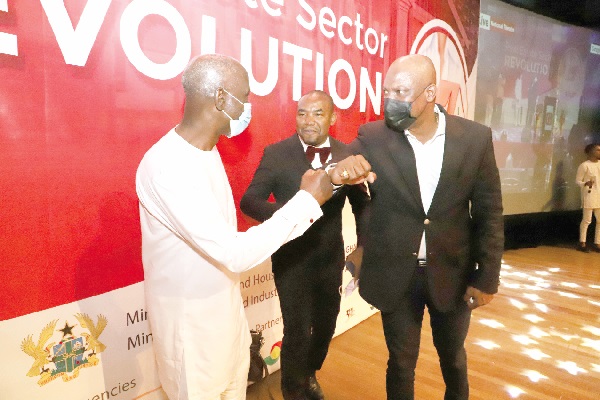 The government intends to leverage the Pension Fund to finance housing delivery in the country, the Minister of Works and Housing, Mr Francis Asenso-Boakye, has said.

In addition, the government was in the process of establishing a National Housing Authority (NHA) to create the right institutional framework for the housing industry, as well as regulate the sector, he added.

Mr Asenso-Boakye made this known in a speech read on his behalf by his deputy, Mr Abdulai Abanga, at the launch of the Graphic Communications Group Limited’s (GCGL’s) Real Estate Sector Revolution initiative in Accra yesterday.

The GCGL is undertaking the initiative in collaboration with Elrano Projects and Consults to, among other things, help create the platform to fashion out ideas on how to address the housing deficit.

The activities for the main event, which will be held at the National Theatre from September 17 to 19, 2021, include a housing fair, a roadshow and training on financial sector engagement.

Elaborating on plans to leverage the Pension Fund, the minister said that would come with a review of the Pension Act to increase its portfolio for financing housing from the current five per cent rate.

The move, he explained, would help secure long-term and sustainable financing for the housing sector.

On the process to establish the NHA, Mr Asenso-Boakye indicated that the authority would not only serve as the regulator but also plan, develop and manage housing development in the country.

He pledged the commitment of the ministry to engage all stakeholders within the sector to contribute to the establishment of the NHA and find indigenous ways to address the housing challenges.

“The expectation is that the operations of the NHA will help complement the activities of the newly created National Housing and Mortgage Fund, which is to stimulate the demand-side of the housing market to make housing accessible to low-to-middle income earners,” Mr Asenso-Boakye said.

He observed that the growing housing market was saddled with challenges that made housing delivery a very complex and expensive venture for most Ghanaians.

He applauded the GCGL and Elrano Projects and Consults for the initiative and expressed the hope that it would serve as a platform to learn and exchange ideas with stakeholders to address existing challenges.

Addressing the gathering, the Managing Director of the GCGL, Mr Ato Afful, said rapid urbanisation had intensified the need for the provision of decent, equitable and affordable housing in the country.

Describing housing as a significant investment for everyone, he stressed that access to affordable housing was the solution to the pressing housing deficit.

He, therefore, rallied stakeholders in the real estate industry to support the initiative and proffer innovative solutions to address the raging challenges confronting the housing sector.

“Owning a residential property is considered one of the most important investments an individual can make. However, attaining such an investment feat could also come at a handsome budget.

“It is envisaged that this platform will give potential homeowners the opportunity to choose from a range of housing options that best suit their budget, need, lifestyle and life stage,” he said.

“As industry players, experts and advocates, we have roles and responsibilities in proffering innovative solutions to mitigate this national and human wellness challenge,” Mr Afful added.

The Executive Secretary of the Ghana Real Estate Developers Association (GREDA), Mr Samuel Amegayibor, called for a total revolution in the approach to addressing challenges in the real estate industry to make the sector viable.

He underscored the need for "serious financial engineering", as well as marketing, to achieve affordable housing delivery.

Mr Amegayibor also expressed concern about the rampant discontinuation of projects and called for the implementation of systems that would ensure continuity.

In a speech, an inspirational speaker and playwright, Mr Ebo Whyte, said a 2013 Ghana Statistical Service Report said “rapid increase in population in Ghana has resulted in a large housing deficit, especially in urban areas”.

The report, he said, projected that Ghana needed at least 100,000 housing units annually, while supply was estimated at 35 per cent of the total need.

Mr Whyte said the provision of housing was recognised as a universal human right of every citizen, and the question was how to address that need.

“The point I am making is that if ever there was a need and a time for a real housing revolution in Ghana, it is now, and I applaud the GCGL for catching the vision,” he said.

The Chief Executive Officer of Elrano Projects and Consult, Rev. Elvin Larkai, said it was time for a certain strategic, creative, innovative and daring move in the housing sector, hence the initiative.

“We are saying that, yes, we do know that a lot of things are being done, but the way we are going and the rate at which it is going, we may not realise that dream in our lifetime,” he said.

He explained that the need for a revolution in the housing sector was because the country was lagging behind, adding: “We have everything, but we are still lagging behind.”

Rev. Larkai said players in the industry were also scattered and fragmented and needed to be brought together for the effective delivery of housing.