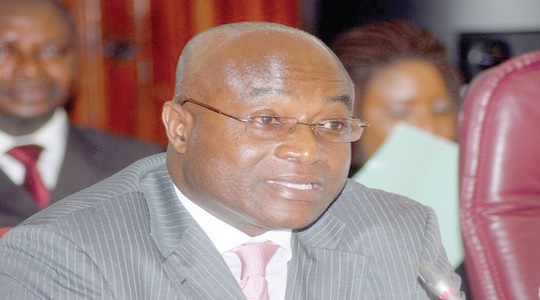 The Majority Leader in Parliament, Mr Osei Kyei-Mensah-Bonsu, has made a strong case for retailers, calling on the government to strictly enforce the legislation that reserves that space for Ghanaians only.

He also urged the government to enforce the law that required any foreigner who wanted to do business in Ghana to invest a minimum of US$1 million and employed at least 12 Ghanaian citizens.

“When it comes to these matters, the country should not compromise on them,” he asserted in contribution to a statement on the Floor of Parliament in Accra last Thursday.

Mr Kyei-Mensah-Bonsu’s contribution was in reaction to a statement by the Member of Parliament (MP) for Manhyia North, Mr Collins Owusu Amankwah, on the involvement of foreigners in Ghana’s retail trade and its implications.

A couple of months ago, some Ghanaian traders at Suame, Kumasi, locked up the shops of some Nigerians who they accused of engaging in local retail trade in violation of the stated provisions of the Ghana Investment Promotion Law (Act 865), which frown on foreigners engaging in the retail business.

Mr Kyei-Mensah-Bonsu also argued that in the sub-region, the ECOWAS protocols provided for the free movement of goods and services, but when the goods arrived at any destination, the laws of that country applied and same must be done to protect local retailers.
“It is so in Nigeria.

It is so in Ghana. It is so in Cote d’Ivoire, so let nobody say that because we have ratified the ECOWAS conventions we allow citizens from other countries, including the sub-region and even elsewhere, Chinese, Turkish and so on to engage in the retail business, that’s not so.”

He said so far as the GIPC law was concerned, any foreigner who wanted to do business in Ghana was required to invest a minimum of US$1 million and employed at least 12 Ghanaian citizens, adding that when it came to those matters the country should not compromise on them.

Mr Kyei-Mensah-Bonsu also explained that foreigners who wanted do business in Ghana must regularise their stay and register the business they wanted to engage in.

He cited, for instance, that in the recent Suame incident, it came to the fore that many of the foreigners had registered businesses to deal in certain defined items but had reverted to dealing in the sale of spares parts.

He said when the Ghana Standards Authority was also invited to investigate the issue, it was revealed that many of the spare parts, equipment and medicines, which were being sold by these foreigners, were also sub-standard.

Mr Amankwah called on all the parties involved in the recent disputes between Ghanaian traders and foreigners to exercise restraint in dealing with the matter and be circumspect in their utterances.

He said the parties must also be cautious in their actions and statements in order not to inflame passions which might have the potential to escalate the impasse.

“It may serve us well if we avoid stereotyping persons and groups with negativity and for that matter assume that all Nigerians are bad or that most of them are here to perpetrate fraudulent and criminal activities,” he said.

The MP for Tamale Central, Alhaji Inusa Fuseini, stated that although the government had ratified many protocols to take advantage of other big markets on the continent, it still had the responsibility to prevent foreigners from entering the local retail trade against the laws of the land.

The MP for Bawku Central, Mr Mahama Ayariga, bemoaned the bad attitude of some Ghanaians for aiding those foreigners to flout the laws of the country by fronting and registering those businesses in their name. — GNA